Google pushes Android to live in a material new world 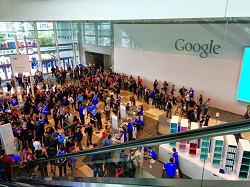 Google is offering app developers early access to the development version of its forthcoming ‘L’ version of Android, as the digital company unveiled smartwatches, connected car software and an emerging markets version of its phone OS.

The company’s seventh annual I/O developers summit kicked off last night with a welter of new services for a range of Android compatible devices.

Jamal Eason, Product Manager at Android, described material design as a way of unifying how Android looks and feels across different types of devices.

He said: “The system is incredibly flexible, allowing your app to express its individual character and brand with bold colours and a variety of responsive UI patterns and themeable elements.”

The latest version of Android will offer lockscreen notifications, giving users content, updates and actions without the need to unlock their screen.

The UI is similar to its existing Google Now organiser function, with users swiping through a series of cards full of information.

Alongside new capabilities in its camera app, Android L will also be compatible with Bluetooth Low Energy, allowing apps to transmit to nearby BLE devices.

Google is also targeting developing markets with its Android One project, which aims to offer its smartphone experience onto low cost handsets.

Sundar Pichar, SVP for Android, Chrome and Apps, said: “We’re working with partners on a comprehensive solution, which includes hardware reference platforms, to address the mobile computing needs of those in emerging markets.

“Android One will provide smartphones that are high quality, affordable and come with reasonable data plans.”

Pichai said India would be the first market to begin selling Android One smartphones, which will sell for less than €75.

Google also announced the launch of the first devices running its Android Wear wearable technology OS, built by Samsung and LG, with a Motorola device coming this summer.

Android Wear allows users to get notifications and fitness information via their smartwatch and is compatible with smartphones running Android 4.3 and above.

In addition to plans for Android TV, Google also announced the launch of Android Auto, which should be coming to cars later this year.

Consumers will be able to find their destination via Google Maps, search Play Music playlists and radio, voice search and get reminders through Google Now.

Pichai said that while more than one billion consumers are using an Android device, Google needed to look beyond smartphones.

He commented: “Many of us are increasingly surrounded by a range of screens throughout the day – at home, at work, in the car, or even on our wrist. So, we got to thinking: how do we invest more in our two popular, open platforms – Android and Chrome – to make it easier for you to easily and intuitively move from your phone, tablet, laptop to your TV, car or even your watch?”

“Some are crowded and chaotic markets, but we predict Android Wear will rapidly become the de facto standard for wearables with screens,” it said.

Google Glass hardware ‘a fraction’ of its pricetag, claims teardown