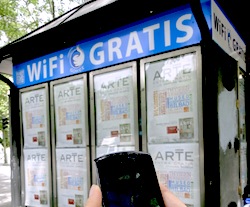 Spanish Wi-Fi provider Gowex is seeking to expand its footprint by starting a new initiative to merge public access and private access Wi-Fi networks from both operators and businesses together, in a bid to achieve seamless mobile data coverage.

We-2 will be launched in New York next month with an initial network consisting of over 2,000 Wi-Fi hotspots in five boroughs, as part of Mayor Bloomberg’s drive to turn NYC into a “technology hub”.

Gowex currently provides Wi-Fi networks and wireless smart city projects in over 80 cities around the world, and wants to achieve We-2 merged Wi-Fi hotspot networks in 300 cities by 2020.

In addition, the vendor is hoping that by merging business and retail Wi-Fi hotspot networks, they can be used for location-based advertising services such as loyalty and coupon alerts to nearby users, using permission-based marketing and data capture.

“We are offering easy access to almost city wide mobile data for consumers, we are giving operators the chance to improve mobile data access for the customers and offload traffic from congested networks, and we are creating a valuable new promotional service for businesses that join our network and share their Wi-Fi capability. Everybody wins,” said Carlos Gomez Vendrell, CEO of  We-2.

“We are speaking with operators and offering them the chance to get on board now and expand their mobile data network coverage today at virtually no cost. By offering their customers the We-2 service in New York, I believe they would increase their city centre data coverage at least fivefold.”