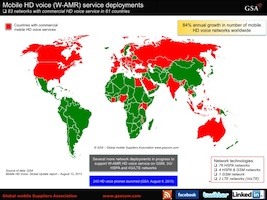 The provision of HD voice services is gaining increasing traction with both operators and handset manufacturers, according to new data.

The vast majority – 76 out of the 83 operators – delivers HD voice on 3G/HSPA networks, while four offer it on both HSPA and GSM. There are just two operators offering the service on LTE (VoLTE), while one provides it on a GSM-only network.

Meanwhile, there are 245 HD voice compatible phones on the market from 17 manufacturers, including Apple, BlackBerry, HTC, Huawei and Nokia.

Telenor announced it was launching HD voice services in Norway in March, with CEO Berit Svendsen saying that sound quality during calls “has not seen any significant improvements since the introduction of GSM in the early 90s”.

In January, Orange announced it was extending interoperable HD voice services to international and roaming calls. The operator’s EVP of International Carriers, Alexandre Pébereau, said the service had become “a must-have service for operators”.