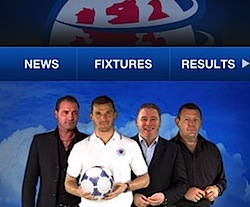 Huawei has signed a seven-figure deal with Glasgow Rangers Football Club to provide Wi-Fi and increased engagement with its fans in the latest move by telcos into the stadium management.

Touted by Huawei as “one of football’s first fully converged stadium-wide Wi-Fi deployments”, Rangers wants to offer fans instant access to content and the ability to participate in real-time interactions with the club.

The deployment will begin next month and Rangers CEO Craig Mather said: “We aim to provide our supporters with a world-class Wi-Fi service to enhance their matchday experience.

“More and more people are using smart devices as a primary means of communication and we look forward to revolutionising the way in which Rangers fans can engage with the club before, during and after the match.”

Huawei’s partnership with Rangers is reminiscent to that of the Chicago Bears football team with Boingo Wireless.

Boingo currently providers a unified cellular and Wi-Fi network for the Soldier Field stadium, where fans have to download the Chicago Bears’ app and watch a 30-second commercial by the stadium’s preferred beer partner before they can access the Wi-Fi.

In a recent interview with Mobile Europe, Boingo said that there was scope to monetise venue Wi-Fi even more.

“We can monetise the network with sponsored packages. You can even have SSID branding saying, ‘Free Wi-Fi by… the preferred advertiser,” said Doug Lodder, VP of Wi-Fi and DAS business, Boingo Wireless.

“Sponsors want to capture users who check their phone during a break. This gives sponsors access to those eyeballs and it gives the venue more advertising revenue, If you have the ability to advertise to all the fans in the stadium, it’s very powerful.”