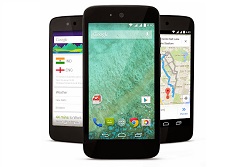 MediaTek technology has powered the first Android One smartphones, as Google revealed its attempt to bring connectivity to developing markets.

The first devices in the Android One project were announced this morning, with hardware companies Micromax, Karbonn and Spice building the handsets. India will be the debut market for the smartphones, which will be priced around €80.

The smartphones will feature MediaTek’s MT6582 mobile system-on-chip, which is based on quad ARM Cortex A7 processors. The processors use MediaTek’s CorePilot technology, which the chip maker said makes it easier for users to multitask and use the handsets for longer.

Other features of the SoC are UMTS Release 8 modem capabilities as well as integrated multimedia functionality for audio, video, graphics and camera.

Mohit Bhushan, Vice President of U.S. Business Development at MediaTek, said: “By collaborating extensively with Google on Android One, we are enabling a total solution that encompasses hardware, software and testing, for manufacturers and brands globally.”

Google said it has signed partnership deals with Acer, Alcatel Onetouch, ASUS, HTC, Intex, Lava, Lenovo, Panasonic, Xolo, and MediaTek rival Qualcomm to join the Android One program.  It said it would launch smartphones in Indonesia, the Philippines, Bangladesh, Nepal, Pakistan, and Sri Lanka by the end of 2014.

Sundar Pichai, Senior Vice-President for Android, Chrome and Apps at Google, said the project was a means of bringing low cost hardware to developing markets, widening the spread of the Android operating system and making data affordable.

He said: “By working closely with phone and silicon chip makers to share reference designs and select components, we’re making it easier for our partners to build phones that are not just great to use, but also affordable. They have lots of processing power, so you can get information quickly. They have high-quality front- and rear-facing cameras. And for all those pictures, along with your apps and videos, Android One phones will have expandable storage.”

Google pushes Android to live in a Material new world