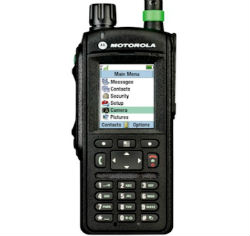 Motorola Solutions has launched the world’s first mission-critical TETRA radio to come with a five-megapixel digital camera and an end-to-end image management system to aid the police in gathering digital evidence.

According to the TETRA Critical Communications Association, as of April 2012, there are 1,000 TETRA networks currently operating in 120 countries, with over 250 TETRA networks being used by governments to provide public safety and other public services, as well as for the military.

Digital evidence is increasingly used in courtrooms to secure convictions, but courts in the US and Australia regularly throw out cases on the basis that images taken with commercial smartphones are not reliable as it is impossible to prove whether or not the images have been tampered with.

Motorola’s TETRA MT6750, which looks like a smartphone-radio for emergency services, aims to help with this.

The device allows front-line police officers to take photographs instantly, for example at the scene of a traffic accident, instead of waiting for a dedicated team to arrive.

It is also the first handheld device to support TETRA Enhanced Data Services (TEDS), an open standard that sends images over the air, much faster than Single-slot Packet Data (SSPD) that existing TETRA radios use.

“TEDS uses the same modulation techniques as cellular wireless and enables you to get hundreds of kilobits of data through by using the spectrum more efficiently.”

There are a host of new features, such as images being tagged and audited with a digital fingerprint that includes exact GPRS coordinates, time-stamp and radio ID.

Images are automatically downloaded from the radio charger to a secure database, which is the only way to access them.

In the case of needing to get critical information to front line officers quickly, such as the picture of a missing child, an officer can tap the radio on a conventional smartphone and receive the picture instantly over Bluetooth.

The picture can then be beamed over the air back to the police control centre, where the new imaging system application can then push the image to thousands of officers at once via WAP.

The imaging system also enables end users to manage network capacity by steering certain user groups to only use certain sites and prioritise access to the network.

“Building in additional capacity is really important when large planned events happen such as the Royal Wedding, but when there are unplanned events such as the London riots, we also have the ability to throttle the network and decide who can send data and how often,” added Ivory.

Each country has a different way of working out its emergency services – in some countries, the public safety TETRA network is built by a consortium, in others, the government engages one operator to run the network.

Motorola has a contract to deploy a TEDS network in Norway, but in other parts of the world it is primarily a TEDS technology vendor.

“Each country and user group will work differently so there’s no one solution. So what we have done within our system is provide an architecture that allows third parties to access the services and create custom solutions for end users,” said Ivory.

“Users define their own policies, so what we’ve done is make it easy to access the services and create applications. In a way, this is moving the same way as enterprise apps in commercial markets, but this industry is a very conservative one.”

In Europe, the spectrum allocated for a TETRA public safety network is 380-400 Mhz, which is only 2.5 Mhz – 5Mhz of spectrum for a country-wide deployment, a fraction of what is used for LTE or 3G commercial data services.

“In the future, we’ll need to increase the capacity of the network by increasing TEDS carriers and TEDS data services. The adoption of data on TETRA has been much slower than the commercial world. There will be a challenge for existing networks on how do you provide that additional data capacity when data adoption increases.”