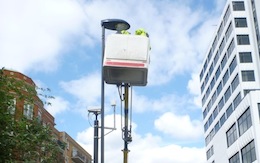 A new report from ABI Research predicts that global small cell shipments will overtake those of macrocells during 2016, with total shipments hitting almost 19 million through 2019. The report said that operators such as AT&T, Verizon, Vodafone, Telefónica, SK Telecom and SoftBank are planning widespread deployment of small cells across enterprises and urban areas.

However, the research firm said because small cells are less secure than traditional macro base stations, both operators and subscribers could be at risk of attack. Measures such as storing user credentials in secure unit, mutually authenticating femto and core, and performing location verification are key to protect users, it added.

Another method that could secure networks is to move data through a trusted protocol such as IPsec. ABI said small cells use of the internet for backhaul could open it to vulnerabilities.

Ahmed Ali, Research Analyst at ABI Research, commented: “Small cells are inevitable parts of future mobile networks, but IP-based backhaul and location risks, like being out of operator direct reach and open to public access, leave the network exposed to various possible attacks.”

He added: “The small cells market is yet to mature; both technical and business-related aspects are constantly evolving to accommodate future services demands. In return, a Small cells security structure must restrain any possible new security threat that may arise.”