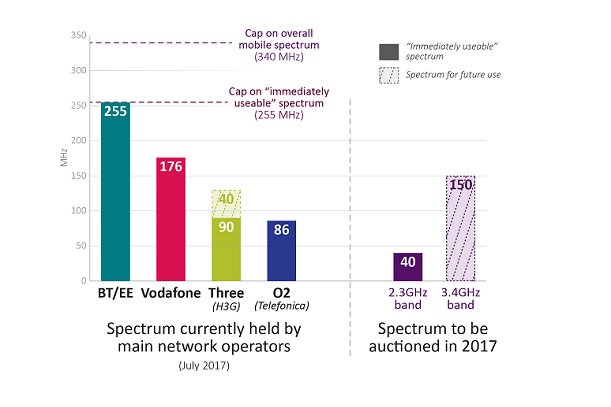 UK regulator Ofcom has imposed caps on the levels of spectrum operators can hold, sparking fury at Three, which said the move was “a kick in the teeth for consumers” that did not go far enough.

The regulator outlined plans this morning to sell 40MHz of 2.3GHz spectrum and 150MHz of 3.4GHz in September, increasing the amount of airwaves for mobile broadband use by almost a third. Both bands had been used by the UK’s Ministry of Defence.

As it first proposed in 2016, Ofcom is putting a cap of 255MHz on “immediately useable” spectrum that a single operator can hold following the auction.

Winners of the 2.3GHz spectrum could hypothetically begin rolling it out immediately because of handset compatibility from the likes of Apple and Samsung.

However, the cap means that BT/EE, which holds 255MHz of useable spectrum and has a mobile customer base of 30 million, will be the only operator unable to bid for 2.3GHz.

EE’s CEO Marc Allera said he did not agree caps were necessary for the UK but added he was looking forward to bidding for additional spectrum.

Ofcom will also impose an overall cap of 340MHz on total spectrum holdings, the equivalent of 37 percent of all spectrum in play by 2020. This move has angered Three, which had been campaigning for a 30 percent cap.

In a strongly worded statement, Three UK CEO Dave Dyson said: “Ofcom’s proposal is a kick in the teeth for all consumers and in particular for the near-200,000 people who signed up to the ‘Make the Air Fair’ campaign.

“By making decisions that increase the dominance of the largest operators, Ofcom is damaging competition, restricting choice and pushing prices up for the very consumers that it is meant to protect.

“The mobile market is imbalanced and failing customers. Ofcom has shown little interest in tackling the problem. We will consider our response as a matter of urgency.”

Three holds 90MHz of the UK’s currently useable spectrum and while it is the smallest player by customer base, at around 10 million, it carries 35 percent of total data consumption.

However, Ofcom said Three’s acquisition of UK Broadband boosted its spectrum coffers by 40MHz in the 3.4GHz band, as well as 84MHz in the 3.6-3.8GHz band.

Three also holds 20MHz of spectrum in 1400MHz band, thanks to a trade with Qualcomm in 2015. Ofcom said that holding could be used from 2018 to help boost capacity.

Ofcom also said Three was being “overly pessimistic” about the state of the UK market in its response to the regulator’s consultation on its forthcoming spectrum auction.

Vodafone was another beneficiary of the Qualcomm trade and holds 176MHz of useable spectrum. It has 19.5 million customers, the third biggest UK operator by customer base, and is behind O2, which has the UK’s smallest spectrum holding at 86MHz but more than 25 million customers.

Mark Evans, CEO of O2, said the plans “fell short of our expectations”, although he did not outline what they were and added he was looking forward to taking part in the auction.

A Vodafone spokesperson welcomed the plans to hold the auction this year and added: “However, we also need to see Ofcom and the UK Government support a pro-investment approach to infrastructure investment more broadly to ensure networks can be built out quickly and efficiently.”

Kester Mann, Principal Analyst at CCS Insight, said the demand for spectrum and differing priorities of the UK’s four operators meant Ofcom was always going to draw criticism for any decision.

He said: “Three’s immediate response represented a stinging attack on the regulator following months of campaigning for more favourable conditions.

Spectrum is vital to it turning around its precarious position in the UK and re-energising a disruptive strategy.

“However, it now needs to push ahead with a bold strategy for the auction and invest strongly to counter criticism from rivals that say it has shied away from previous opportunities.

“The sale is every bit as vital for O2, which has a similar spectrum holding as Three, but more than twice as many customers. It also desperately needs a positive outcome at the auction, but today’s announcement at least offers some clarity to parent Telefónica, as it seeks an IPO of the UK business later in the year.”

Ofcom also said it would look to include coverage obligations for the forthcoming 700MHz auction to include rural areas and indoor. The regulator is planning to sell off an as yet unconfirmed amount of spectrum within that band by 2020.

The regulator is anticipating 3.4GHz spectrum would be used for forthcoming 5G services from 2019 and had hoped to make a chunk of 3.6-3.8GHz spectrum available at the same time.

However, it said this morning it had “less confidence” in freeing up the 3.6-3.8GHz band in time and said it would release forthcoming plans for that spectrum.

Philip Marnick, Ofcom’s Spectrum Group Director, said: “Spectrum is a vital resource that fuels the UK’s economy. We’ve designed this auction to ensure that people and businesses continue to benefit from strong competition for mobile services.

“We want to see this spectrum in use as soon as possible. With smartphones and tablets using even more data, people need a choice of fast and reliable mobile networks. These new airwaves will support better services for mobile users, and allow operators to innovate and build for the future.”