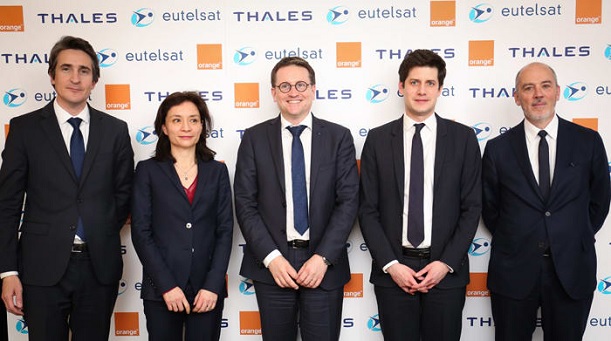 Orange has become the latest company to announce plans to bring satellite-based connectivity to remote areas and within airplanes.

The French operator is working with satellite operator Eutelsat and aerospace company Thales on the project.

Eutelsat will provide its KONNECT Very High Throughput system, and Thales Alenia Space will build the satellite, which is due to go into orbit in 2021. The satellite will operate in the KA-band and provide connectivity of 500GBps.

It is unclear if Orange’s connectivity services will go online at the same time. The operator will focus on providing connectivity in each of its retail markets across Europe, while Thales has signed a distribution deal to offer services to governments across the continent.

An Orange spokesperson did not give further details about its connectivity plans either on land or in the air.

Stéphane Richard, Chairman and CEO of Orange (pictured, right), said: “Satellite is one of the technologies that contribute to building tomorrow’s inclusive digital society, especially for delivering broadband connectivity in rural areas where it is sometimes challenging to set up traditional broadband networks.

“With this agreement, we will enhance our portfolio of very high speed internet solutions delivered by satellite, offering all our customers across Europe digital services of premium quality.”

Rodolphe Belmer, CEO of Eutelsat, added: “Over the next decade, VHTS satellites will bring enough capacity to serve high speed internet and in-flight connectivity markets at scale, offering fibre-like services both in terms of price and speed.”

The German operator’s European Aviation Network was due to go live last year but is now set to come online this summer.

While the network has been given the go-ahead by regulators in France and the UK, it is experiencing problems in Belgium, where satellite partner Inmarsat is facing claims by rivals that it is abusing its spectrum licence.

A spokesperson for the European Aviation Network said in March that the project remains on track.