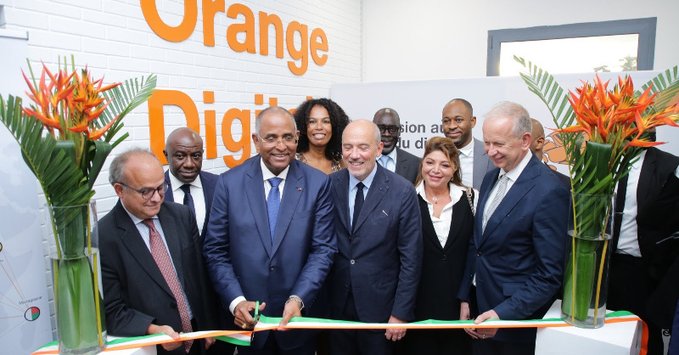 Strategy to give every African better digital access, more opportunities

The Orange Group has launched two more of its educational Digital Centres in Côte d’Ivoire and Cameroon.

As part of its Engage2025 strategy, it plans have an Orange Digital Centre in each of its African markets by 2025. The objective is to foster development of the digital ecosystem across the continent with emphasis placed on better access for young people and women.

The programmes are free and open to everyone and the range of education varies from training young people in digital technology, through supporting community project leaders to nurturing creativity in start-up incubators and support with attracting investment.

The two new centres opened in Côte d’Ivoire and Cameroon were created and supported in a partnership with the German Cooperation and overseen by Orange CEO Stéphane Richard and Alioune Ndiaye, CEO of Orange Africa and Middle East.

Almost all (90 per cent) of the training courses are hands-on and experiential, rather than lecture-based. The goal is to bring out the talents of candidates and encourage leadership skills in both product development, project direction and commercial strategy, according to Orange.

In Africa connectivity was extended to 413 million new users by the end of 2020 according to GSMA. The continent’s young population, where one in two people are under 20, present’s ‘considerable digitalization challenges’ says Orange, which has been active in 18 countries for 20 years. It claims to have invested one billion euros per year to raise the level of connectivity and funded digital education programmes.

So far, eight Orange Digital Centres have already been opened, in Tunisia, Senegal, Ethiopia, Cameroon, Côte d’Ivoire, Jordan, Morocco and Mali. More centres in other countries are promised by the end of 2021 and during 2022.

Orange is a socially responsible company everywhere it has a presence in Africa, said Orange CEO Richard: “Commitment is a core company value and we aim to deploy an Orange Digital Center in every country where we operate by 2025. This reflects our determination to take action to make digital technology a positive innovation.”

Ndiaye, CEO of Orange Africa and the Middle East, promised a network of 32 Orange Digital Centres deployed in Africa the Middle East and Europe. The main objective is to give access to digital technology for young people, whether qualified or not, in all the countries in which Orange operates. “I am very proud to inaugurate the sixth Orange Digital Centre in Cameroon,” said Ndiaye.