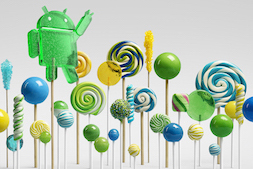 Google's Lollipop operating system is failing to gain traction, with fewer than one in one thousand Android devices running the OS.

The latest figures released by Google revealed that Android continues to be dominated by the Jelly Bean version, which dates back to June 2012. It runs on 46 percent of all Android devices.

KitKat, which was launched in October 2013, is on 39.1 percent of smartphones running the world's most popular OS.

In the latest data on its developer blog, Lollipop, which was announced last summer, is not mentioned as any versions with a market share of less than 0.1 percent are not shown. By contrast, Gingerbread, a version of Android dating back to February has a 7.8 percent market share.

Android trails far behind rival Apple in terms of user's adopting its latest operating system. Apple said 68 percent of its iPhones and iPads are using iOS 8, which was launched in September last year. This is because Apple fully controls its device ecosystem, whereas Google partners with a range of different manufacturers, who in turn offer their own versions of the operating system.

Analyst Richard Windsor said the new data from Google was "deeply troubling" for the company, as Lollipop represents a marked improvement in its operating system.

He commented: "Ease of use is the single biggest failing of Android and because Google’s ecosystem runs on Android, it too is hobbled with the same problems.

"This puts the Google ecosystem at risk of losing market share if other offerings can offer an easier and more enjoyable experience."

He said the company needs to wrest greater control over the operating system as he claimed loyalty to it was low. He added: "The Microsoft ecosystem represents a threat to Google as it has a pretty good offering of Digital Life services and its experience is certainly easier and less frustrating to use."

Lollipop was first revealed in June, with Google issuing more than 5,000 new APIs for developers to work on the OS. It is Google's attempt to unify Android and services such as its mail and maps across smartphones, tablets and laptops.