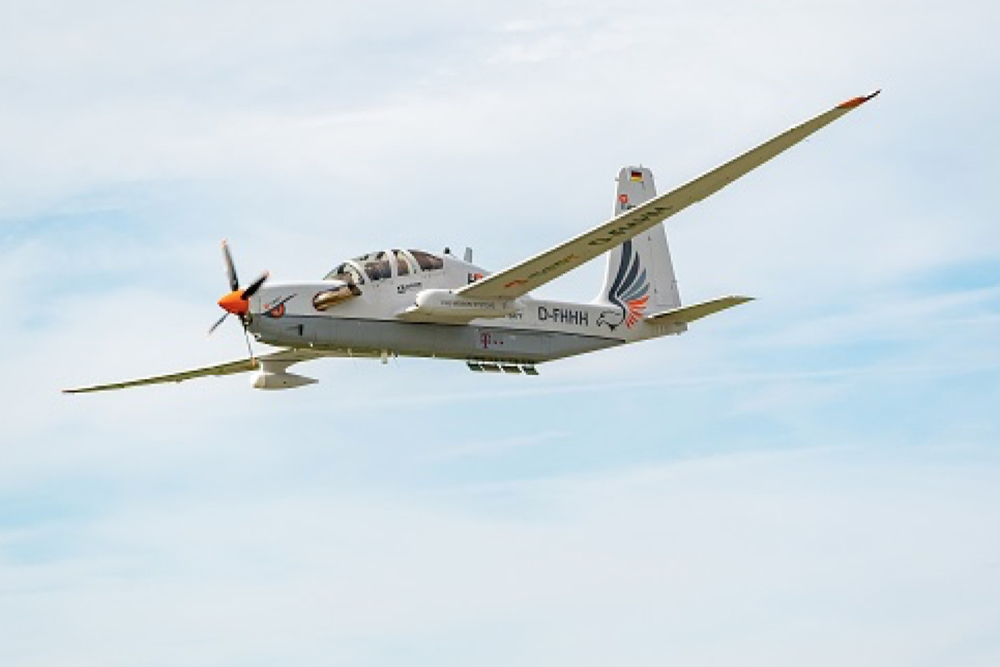 Deutsche Telekom (DT) and its technology partner Stratospheric Platforms Limited (SPL) conducted what it says is the world's first successful demonstration of 4G voice and data connectivity from a platform flying at the edge of the stratosphere and fully integrated into a commercial mobile network.

Beginning in October, several test flights were carried out in Bavaria with a remote-controlled aircraft system at an altitude of approximately 14km (Flight Level 450) to establish voice and data connections via the antennas installed on the aircraft.

During the test, the smartphone was connected to DT’s terrestrial mobile network via antennas on the aircraft.

The stratospheric test showed download speeds of 70Mbps and upload speeds of 20Mbps in the 2.1 GHz range over a channel bandwidth of 10 MHz.  Due to the high flight altitude and an almost unobstructed view of the ground, an airplane can use special antennas to supply radio cells with a diameter of up to 100km to supplement the mobile phone network on the ground.

Coverage for places in radio shadow

Mobile radio use would be possible in the future, especially in areas that are currently in a radio shadow, such as due to geographical elevations, the so-called "white spots".

DT claims that, “For customers, the transition of the connection from a classic cellular mast to a flying antenna happens smoothly in the background and unnoticed.”

" We have shown that we can bring fast Internet and connectivity anywhere in the future. The combined know-how of SPL and Telekom's mobile communications expertise is the basis for this new technology," says Bruno Jacobfeuerborn, member of the SPL Board on behalf of Deutsche Telekom and Managing Director of Deutsche Telekom's subsidiary Deutsche Funkturm.

He added, "Particularly in areas that are difficult to access with traditional mobile masts, flying base stations will be a useful and cost-efficient addition to our mobile communications network".

SPL is working with other partners to develop a hydrogen-powered, remote-controlled aircraft and associated communications payload and related ground-based infrastructure. It is also orchestrating the production and service partner ecosystem required to deliver the technology in a commercial deployment. The first flight is scheduled for mid 2022.