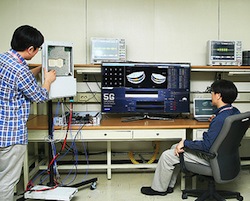 5G is the next generation of 4G LTE and will require a broad band of frequencies to enable mobile broadband data speeds of up to several tens of Gbps per base station.

Millimeter waves are extremely high frequency bands from 60GHz, 71 to 76 GHz, 81 to 86 Ghz and 92 to 95 Ghz that can only be used over short distances such as a few kilometres due to high free space loss and atmospheric absorption.

At the moment, millimeter waves are seen as being ideal for small cell mobile backhaul due to the fact that short distances are possible in a densely populated urban area, but Samsung claims that its adaptive array transceiver technology can overcome the radio propagation loss by using 64 antenna elements.

The new technology can transmit data in the millimetre wave band at a frequency of 28 GHz at a speed of up to 1.056 Gbps to a distance of up to 2 kilometres.

This would enable massive data files such as ultra high-definition movies to be streamed real-time to mobile subscribers, as well as 3D movies and games.

Samsung wants to accelerate 5G development with a view to 5G hitting markets in 2020, which is in line with the timescale set by the European Commission, which plans to invest €50 million this year into 5G research.

“Samsung’s recent success in developing the adaptive array transceiver technology has brought us one step closer to the commercialisation of 5G mobile communications in the millimetre-wave bands.”