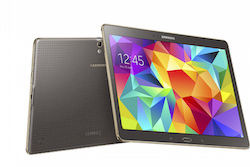 BlackBerry company Secusmart is working with IBM and Samsung to launch a new high-security tablet aimed at enterprises and the public sector.

The SecuTABLET, based on the Samsung Galaxy Tab S 10.5, has been designed as the “last link” in secure mobile communications for national and international authorities, Secusmart claimed.

The device provides both voice and data encryption, with an “anti-eavesdropping app” from Vodafone called Secure Call allowing companies to make private calls regardless of the device being used on the other end. Meanwhile, secure “app wrapping” technology from IBM provides additional security for traditionally unsecured apps such as Facebook, Twitter and YouTube.

Stefan Hefter, Senior Management Consultant with IBM, said: “The SecuTABLET closes a supply gap and opens up for government and administrations an opportunity to derive greater benefit from digitisation and the mobile Internet, with system integration as a fundamental success factor…The technology used to make mobile apps secure by means of so-called wrapping has already proven its worth in the United States.”

Secusmart revealed the SecuTABLET is currently undergoing certification by the German Federal Office for Information Security for the German VS-NfD (classified – for official use only) security rating.

The device forms part of the SecuSUITE portfolio for BlackBerry 10 and will be launched at CeBIT 2015 in Hanover, Germany.

Hans-Christoph Quelle, CEO of Secusmart, said: “National and international government customers have entrusted their voice and data communications with the Secusmart Security Card for years. This same technology is what secures the new SecuTABLET.

“Working alongside IBM and Samsung, we have added the last link in the chain of the Federal Security Network. Subject to certification of the SecuTABLET, German government agencies will have a new way to access to BlackBerry’s most secure and complete communications network in the world.”