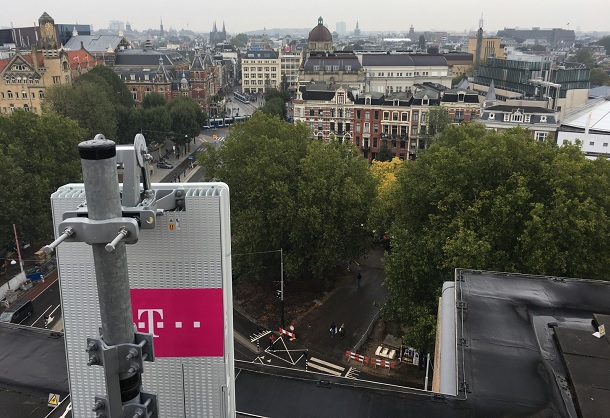 T-Mobile has introduced Massive MIMO technology on its LTE network in the Netherlands in a first for the country.

Working with Huawei, the operator has deployed the technology at Amsterdam’s Leidseplein square, boosting network capacity to 600MBps compared to the 100MBps offered by traditional hardware.

The antenna contains 64 receive and 64 transmit channels, using beamforming technology to send multiple data streams within the same 20MHz slice of spectrum in the 2600MHz band.

This boosts network efficiency and offers a faster and more stable connection to a wide range of users, the two companies said. Tests of the technology have allowed 16 users to simultaneously achieve download speeds of over 35MBps on Huawei P9 handsets.

Now available to all T-Mobile subscribers, the feature is supported by a range of handsets including Apple iPhones 6 and up, HTC’s 10 and One models, Huawei’s P9 and P10, the LG G5 and G6, the Samsung Galaxy S7 and S8 and Sony Xperia X and XZ models.

The Deutsche Telekom-owned operator said it would work with Huawei to launch other unspecified upgrades to its network during the autumn.

Richard Marijs, Technology Strategist at T-Mobile Netherlands, said: “At the moment the focus is just on mobile internet for consumers and business users and the T-Mobile network has more than enough capacity to satisfy this demand.

“However, in the near future 5G services are going to be added, combined with data traffic from self-driving cars, for instance, connected cameras used by law enforcement officers, smart city applications such as smart street lighting, and other Internet-of-Things applications.

“We are in the process of getting our network ready for the optimal processing of all that data in order to keep busy cities liveable for all their residents.”

Vodafone was the first European operator to launch Massive MIMO for commercial use, introducing the technology on its network in the UK earlier this year.

Trials have been taken by other operators including Turkcell, Telekom Austria and Bouygues Telecom.