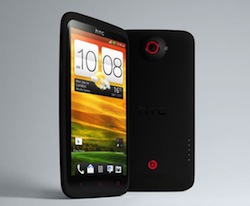 Latest smartphone sales data from the UK indicates that Nokia, LG, Sony and HTC are slowly increasing their market share, which could signify a more competitive device manufacturer landscape.

Between January and March, HTC managed to grow its market share to 9.1 percent due to the success of its refreshed HTC One X+ and the HTC 8S, according to research firm Kantar.

This makes the company the third largest smartphone manufacturer behind Samsung and Apple currently and marks something of a turnaround.

HTC’s market share peaked at 16.8 percent in May 2012, after which it fell steadily to eight percent in November 2012.

Nokia and Sony have almost tied in device market share over the last 12 months, despite using different mobile operating systems. They have maintained a roughly steady five percent share.

However, in the last three months, Nokia has grown its market share to 5.6 percent.

LG has also had a new lease of life, with its share hitting 4.3 percent in the last three months, mostly due to its sales of the Google Nexus 4 handset.

On the other hand, BlackBerry has fallen steadily over the last 12 months to 5.1 percent.

Despite this, Kantar’s global consumer insight director Dominic Sunnebo feels that BB10 could still beat Windows Phone to becoming the third most popular consumer mobile OS after Android and iOS.

“In the UK I would expect BlackBerry to stage a comeback towards the middle of the year when the QWERTY Q10 is released and the price of the Z10 drops; this is likely to bring BlackBerry share above Windows again,” he said.

“With just Nokia & HTC putting real effort behind Windows Phone I would also expect share in the UK to start to plateau at around 10 percent. Samsung could, of course, make the biggest difference to this, but with the focus seemingly still on Android, and Tizen being launched this doesn’t look likely.”

Sunnebo added that Windows Phone is far more likely to show continuous growth in other European markets like Germany and Italy, which still have a very significant Nokia installed base, as well as emerging markets where Nokia remains a leader.

“It would appear that the majority of BlackBerry Z10 devices are being sold either to enterprise, or outside the UK. It will require a full quarter of Z10 sales to realistically establish consumer reaction to the handset,” Sunnebo said.

The latest figures appear at a time when speculation is rife that Facebook is set to launch something in the mobile space.

The social networking site has announced an event on Thursday at its California headquarters, with the invite reading, “Come see our new home on Android”.

It is rumoured that Facebook might be planning a new Facebook smartphone running on HTC Android smartphones or a new homescreen interface to run on Android devices.