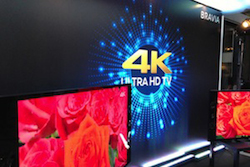 User generated content will drive the market for 4K compatible smartphones, with Germany and the UK set to play a key role in the adoption of the technology, Qualcomm has said.

The chipset manufacturer’s President for Europe cited research predicting there will be more than one billion smartphones with a camera of more than 8MP by 2017.

Enrico Salvatori said technology such as high-efficiency video coding, LTE/LTE-A networks and the performance of system on chip products made it easier to support 4k. Qualcomm launched its first 4K compatible processor, the Snapdragon 805, earlier this year.

The US-based company said it had researched retailers in the UK and Germany about 4K adoption. It found 40 percent of retailers said they felt consumers filming their own 4K content would be a key driver, a proportion that hit 60 percent among UK retailers.

Salvatori commented: “Content generation is what will drive the industry.”

He made his comments as research from CCS Insight demonstrated the extent to which mobile is driving this emerging technology as well as LTE broadcast.

Paolo Pescatore, Director of Apps and Media, said: “Slow replacement cycles for TVs mean that 4K has yet to become widely adopted. We believe that mobile and tablet manufacturers will lead the charge for 4K usage, bring out more devices with cameras, screens and chipsets capable of 4K recording, playback and upload.

Meanwhile, Salvatori said Europe was fighting back in terms of the rate of LTE adoption and said economies of scale would help to drive the deployment of new technology in the years to come.

He commented: “Europe is a very very important market because of the traction of smartphones… we already have many carriers in Europe demanding carrier aggregation support. Europe is definitely hitting back in developing the LTE roadmap. There’s a lot of spectrum available.”

He described innovations like carrier aggregation as being “essential” to improve the overall customer experience.

As more and more operators move to implement such technology, the cheaper it can be brought to smartphones, he believes.

“This is the classic economies of scale. As soon as we see the traction and volumes we can make it happen,” he said.