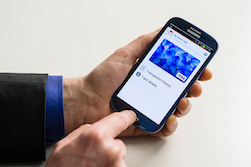 Vodafone Wallet customers will soon be able to use their smartphone to make contactless payments at NFC terminals after the operator revealed it is adding bankcard support to the system.

Following a new agreement with Visa users will be able to load their credit and debit card details into the app and use it to pay for goods and services at supporting merchant terminals.

Currently, Vodafone Wallet restrict users to payments of up to £20 through its SmartPass system, which customers can only use after receiving an NFC tag that is attached to the back of their smartphone.

However, the operator said that the service is restricted to Android smartphones at present. Users also require an NFC SIM that securely stores card details.

Once set up, payments are automatically debited from users’ bank accounts, with higher value payments protected with a user-defined four-digit PIN. Ownership of the used bank card is authorised using the “Verified by Visa” authentication system.

Carta Worldwide is providing the payment card-enabling technology behind the system, which will be launched in the second quarter of 2015 in Germany, Spain, the UK, Italy and the Netherlands.

Mark Ritzmann, Head of mCommerce at Vodafone, said: “The digital wallet just took another step forward. With a few clicks, customers will be able to add payment cards to their Vodafone Wallet and use Android smartphones to pay at contactless terminals.

“Thanks to our agreements with Visa and Carta Worldwide, using bank cards stored on Vodafone Wallet is fast, secure and simple.”