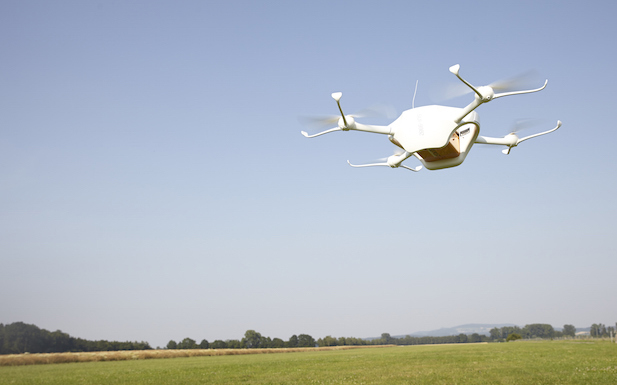 It was with a liberal pinch of salt that many took Amazon’s idea to deliver packages via drones when it first came to light in 2013, with many questioning the feasibility of something so science fictional.

Yet the seemingly pie-in-the-sky (cough) approach now looks to be very much a reality. What’s more, the first drone delivery system may not come from the internet megastore at all.

This week, Switzerland’s official postal service revealed it will be taking to the skies later this month to trial drone-based logistics. The autonomous flying machines will only be able to handle loads of up to a kilo – which should help ease fears over any potentially messy mishaps.

Still, Swiss Post reckon it’ll be at least another five years before this sort of thing becomes anywhere near the norm, meaning the careers of Swiss posties aren’t under threat just yet.

The company has taken a hit of $8.5 billion (€7.7 billion) and announced that 7,800 jobs face the axe, after writing off the value of the handset business it acquired from Nokia 2012. CEO Satya Nadella has said that while Microsoft still has a future in handsets, its devices unit will be trimmed significantly in order to focus on enterprise and flagship handsets.

It’s hardly surprising when you look at the figures: according to IDC, Windows Phone holds just 2.7 percent of the global handset market, compared to Android’s 78 percent and iOS’s 18.3 percent.

Samsung also had cause for concern this week as it revealed that its Q2 figures had been hit by the company’s inability to keep up with consumer demand.

Operating profits fell short in Q2 thanks to an oversight in the predicted popularity of its Galaxy S6 Edge handset. The company apparently assumed that the “regular” S6 would prove most popular with users, before finding out the hard way that it hadn’t produced enough of the Edge’s curved displays to go around.

The company is said to be bringing forward the launch of its Note 5 phablet to help resuscitate sales, which is now tipped to launch mid-August instead of its usual September window.

On the opposite end of the smartphone spectrum, EE this week launched what it’s labelling the UK’s cheapest 4G handset.

While the Rook doesn’t quite have the curved charisma of Samsung’s device, EE reckons Android 5.1, 8GB memory and a 64-bit processor for under 50 quid will tempt frugal 4G lovers.

You can run, but you can’t hide

Connecting sportspeople seems to be the next big thing, if recent announcements from Deutsche Telekom and Orange are anything to go by.

Similar to Orange’s idea to fit sweaty cyclists in the Tour de France with camera and mic, the German MNO is connecting 130 triathletes with transmitters at this month’s at Challenge Roth event.

The rather creepy initiative means fans will be able to monitor athletes at the world’s largest long-distance triathlon live, from start to finish, via a web portal.

The “LiveRank” system is equipped with a SIM card, Bluetooth and GPS module amongst other tech that transmits athletes’ location and speed data over a mobile network, which can be viewed by fans on various devices. There’s also an SOS button that will allow athletes to contact the nearest first aid station should they need it.

Finally, fish sonar was something that we didn’t know about until this week and we feel like our lives are all the better off for learning about it.

FishHunter is a “military-grade” fish locating device that you can lob into a pond, or lake, or any life-supporting body of water for that matter, and have it tell you where’s there’s good fishing to be had.

The baseball-sized device is cocooned in a waterproof (obviously) silicone case and employs a high frequency transducer operating at 380Khz to analyse the water. It then transmits data on water depth, temperature and fish locations back to anglers.

FishHunter has the power to analyse depths up to a rather impressive 40 metres – that’s 130 feet – with GPS tracking and mapping info viewable on smartphones or tablet. And that’s no-fin to be sniffed at.