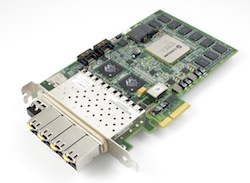 Adax has debuted the first diameter signalling router that is available as a card that can be integrated with existing routers to help scale up networks over time.

Running on Aricent’s Diameter Software Framework to negate interoperability and upgrading woes, the solution features Cavium’s Octeon II processor and is available either as a standalone router node, or on the Adax Pkt2-PCIe and Pkt-AMC cards and the PacketRunner ATCA blade.

With LTE global subscribers set to hit one million in 2017, Adax is concerned that operators will be unable to deal with the dramatic increase in diameter signalling that 4G LTE networks will generate ­– a problem it feels is more pressing than the data crunch (read: LTE Diameter signalling traffic to grow twice as fast as mobile data).

As such, the new solution is 3GPP, IETF and GSMA compliant and comes with LTE network features such as high capacity, fault tolerance, scalability, load sharing, redundancy, as well as support for TCP/SCTP/TLS and IPv4/IPv6.

“[Operators] are [currently] doing diameter signalling through their existing servers. With the Diameter Signalling Router, all the diameter signalling is now done on the card. We can put our card in anything from a small 1U box to a large rack,” Robin Kent, director of Adax Europe told Mobile Europe.

“If you don’t do this, you have two choices. You can either watch the performance of your network or application areas – policy management, charging systems, servers – go down, or you have to buy a bigger network.

“If you go back to a lot of surveys on LTE and diameter, then the big things that come up are network survivability and network scalability. That’s what we’re offering here – the ability to scale the network up as diameter traffic increases.”

The greatest contributors to diameter traffic are the interfaces between the MME and the Home Subscriber Server (HSS) and between the Policy Control Enforcement Function (PCEF) and the Packet Data Network Gateway (PDN-GW) or signalling gateway.

“Those two gateways alone contribute to 60 percent of the diameter traffic,” added Kent. “Diameter is the equivalent of SS7 signalling in the LTE network.”

Adax has had a long experience in SS7 signalling, being the first vendor 30 years ago to offload host-intensive SS7 MTP2 transactions onto cards.