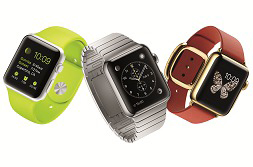 Smartwatches will account for 40 percent of consumer wristworn devices within 18 months, as demand for Apple’s Watch and cheaper devices from Chinese OEMs and ODMs stimulates the market.

It said the Apple Watch, which was revealed last week and goes on sale in 2015, will capture the high end of the market. Angela McIntyre, Research Director, said: “As with the iPhone, Apple’s high-price strategy for the Watch will limit its market share; yet, with its attention to design and the user interface, we believe this product will attract many users.”

Zimmerman said that user design has substantially improved since the first generation of wearable devices. She said: “The Sony Smartwatch products the Samsung Gear were early products that received much attention in the press but less enthusiasm from consumers due to their unclear value proposition and flawed design.

“In 2014 we are seeing a few more positive developments in terms of design and user experience and we therefore expect consumers to show more interest in these products in the second half of the year.”