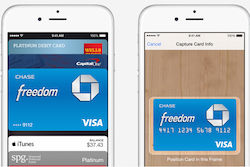 Apple has unveiled a new contactless payment system for its latest iPhone 6 smartphone, in addition to launching a long-rumoured smart watch.

Apple Pay allows iPhone 6 users to pay for products and services via NFC with authentication provided by the device’s TouchID fingerprint sensor that users hold when undertaking a transaction.

Rather than storing card details on the phone, the Secure Elements chip inside the iPhone 6 generates a unique account number that’s used to process payments. By doing so, the account holder’s details remain anonymous, with Apple claiming transaction details are visible only to the user and the bank itself.

The US manufacturer said all account details are encrypted within the phone to prevent access by third parties or Apple itself, with users who misplace their device able to remotely locate, lock and wipe the device entirely if necessary.

The tech also enables users to make purchases in-app with a single touch of an Apple Pay button.

Apple Pay is expected to launch next month and 220,000 stores, including Disney, McDonald’s, Nike and Bloomingdale’s, have signed up to accept it.

An Apple Pay API is also available in iOS 8 as the company hopes to push developers to incorporate the new solution into future apps and services.

Apple also announced the Apple Watch, which incorporates its fitness-tracking software and a motion-activated display that turns on when the wrist is raised.

The device features a new interface, which the company says has been designed to tackle the challenges of magnifying content on a smaller display.

As well as being touch-enabled, the device features a side-winder or “digital crown” that allows users to make more precise movements in apps, such as zooming in or setting timers.

The Apple Watch will be available for purchase in 2015. Last month, analyst firm CCS Insight forecast that shipments of smart wearables are expected to grow from 9.7 million in 2013 to 135 million in 2018.

Apple Pay and the smart watch were launched alongside the new iPhone 6 and larger iPhone 6 Plus phablet.