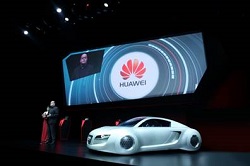 Audi has become the latest car manufacturer to explore how mobile can transform its business by teaming up with Huawei to test new technology.

Huawei’s LTE modules will be fitted onto the new Audi Q7 SUV to provide the vehicle with access to 2G, 3G and LTE networks, as well as TDD-LTE and FDD-LTE connectivity.

The China-based vendor cited research by Telefónica, which said that 90 percent of cars will be connected to the internet. Earlier today, Qualcomm announced it was working with Daimler in an attempt to bring mobile technology to its vehicles.

Richard Yu, CEO of Huawei Consumer Business Group, Huawei, commented: “We see the unlimited opportunities available in the interconnected car market and we are excited about our partnership with Audi Group.

“By partnering with industry-leading automobile companies like Audi, Huawei aims to bring the best interconnection services and solutions to the next generation of cars, while actively promoting interaction between cars, smartphones, wearables and people, creating a seamless communication experience and driving environment.”

However, research from Machina last week warned that the expected boom in connected cars could lead to “grave implications” for networks.

Matt Hatton, Machina Research CEO, said: “In terms of overall data volumes, connected cars don’t present much of a problem. But network resource management is not based on total traffic volume, it’s based on particular cell sites during peak times of network use.

“If connected cars regularly cause network traffic spikes in a particular location that can’t be met, there are implications for operators in meeting SLAs and delivering a positive quality of experience.”

Meanwhile, Huawei also announced it has released its commercial verification of the LTE TDD inter-band three carrier aggregation which it tested with Qualcomm and China Mobile.

Swisscom gets into gear with country’s first driverless car