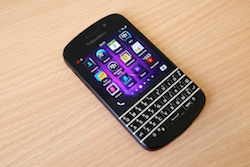 BlackBerry has launched its Internet of Things platform, with the smartphone maker highlighting its security, data mining and analytics features.

The new platform, which will use its QNX software and was first announced in May 2014, will be initially targeted at the shipping and automotive markets, with plans to extend it into energy and healthcare.

A messaging system is at the heart of the platform, which BlackBerry said can be scaled up according to demand. Additional modules can be fitted onto it delivering the likes of security, instant data indexing and storage, analytics and validation.

A management module comprises an over the air software update, application launching and data collection, which BlackBerry said would enable companies to speed up device deployment and increase the length of time they are in use.

Matt Hoffman, VP of Strategy and Marketing, BlackBerry Technology Solutions, commented: “The BlackBerry IoT Platform blends the technologies that have enabled BlackBerry to become a leader in both the mobile data security and embedded systems industries.

“By combining the BlackBerry global network and device lifecycle management proficiency with the embedded software experience of QNX, we have built a modular, cloud-based platform that gives customers the chance to build IoT applications in a secure, efficient and scalable way.

“Looking ahead, we will extend the platform with other BlackBerry technologies to give developers additional control over the flow of information to devices on the network’s edge.”

The company made the announcement at this year’s CES, where the Internet of Things has dominated the headlines. On Monday, Samsung said there would be no dominant player within the sector, with partnerships central for its long term success.

​BlackBerry also announced it was extending support for its BBM messaging service to wearable technology running Android Wear. Users will be able to receive, read and respond to messages on smartwatches.​