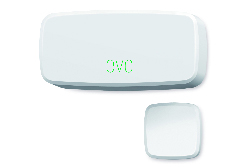 Connected home products were to the fore on the second day of CES.

App-powered accessories company Elgato revealed a new hub for the connected home that will be compatible with Apple’s HomeKit system.

Elgato Eve consists of a range of sensors that can be placed around the home to gather information on factors such as air quality, temperature, humidity and air pressure.

The sensors communicate via Bluetooth Smart technology, negating the need for a Wi-Fi connection. Gathered data can then be accessed on connected iPhone, iPad and iPod touch devices.

The product is also compatible with other devices built for Apple’s HomeKit system and allows users to create commands to control multiple home settings at once, such as locking doors and turning off lights.

Qualcomm’s Wi-Fi technology provided the basis for a slew of announcements.

By using a MoCA 2.0 coax network as the wired backbone, Entropic said service providers can deliver high speed Wi-Fi coverage to in-home dead spots where traditional single access points do not get coverage.

Amped unveiled a MU-MIMO Wi-Fi router, featuring Qualcomm Atheros’ 802.11ac solution, that it claimed delivered up to four times the coverage of other routers for those with multiple users.

The MT8507 allows users to stream audio from smartphones and other personal devices to “Cast Ready” speakers and soundbars, and features support for services including Google Play Music, YouTube, Pandora, and iHeart Radio.

The manufacturer claimed it is the industry’s first connected audio SoC to support Google Cast for audio.

Samsung leaps ahead of Apple, Google in IoT race with SmartThings buy