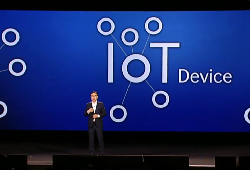 Samsung sang from the collaboration hymnsheet at this year’s CES, arguing for a collaborative and people focused attitude towards the Internet of Things, as Qualcomm revealed a new smart lighting concept.

The Korea-based manufacturer said it would invest more than $100 million (€84 million) into its developer community this year to help boost the ecosystem.

It said that by 2017, all of its televisions would be connected via the IoT and by 2019 all of its hardware would be IoT ready.

Samsung CEO and President BK Joon commented: “The IoT has the potential to transform our society, economy and how we live our lives. It is our job to pull together — as an industry, and across different sectors — to make true on the promise of the IoT.”

He added: “The IoT is not about ‘things.’ Instead, it is about people. Each person is at the centre of their own technology universe, and the IoT universe will constantly adapt and change shape as people move through their world.”

He also revealed some of Samsung’s plans to develop new chips and sensors. The company has developed a three-dimensional range sensor, which it claims can detect movements in minute detail. New chips, such as embedded package on package and bio-processor, will be energy efficient and will fit into wearables and mobile devices.

Last August, Samsung bought smart home platform SmartThings and the company claimed yesterday that that ecosystem is compatible with more devices than any other platform.

Yoon said because of the potential of the IoT, collaboration was vital to ensure the right infrastructure is built for companies to take advantage of. He said: “I know in my heart that neither one single company nor one industry alone can deliver the benefits of the IoT. To create this IoT universe, we have to see the potential of the IoT across all kinds of industries. Only if we work together can we improve people’s lives.”

Meanwhile, Qualcomm revealed its Atheros subsidiary has worked with smart lighting specialist LIFX to develop a turnkey Wi-Fi based platform, which they hope with strengthen the connected lighting sector.

The platform comprises a lighting connectivity module and LED bulb design. The Wi-Fi technology allows the lights to connect to a home system, without needing a home hub or translator.

Qualcomm said the solution complies with the open-source Lighting Service Framework, which is interoperable with AllJoyn smart devices.

Joseph Bousaba, Senior Director of Product Management, Qualcomm Atheros, explained: “Alongside LIFX, we are eliminating barriers for the Wi-Fi based smart lighting segment, while extending compelling experiences offered by the Internet of Everything.

“Similarly, with the Lighting Connectivity Module and the Allseen Alliance’s Lighting Service Framework, we are making product entry easy and enabling manufacturers to ensure that their smart lighting products interoperate with a wide variety of systems and services within the smarthome.”​