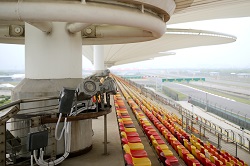 The cells were used to handle more than half the traffic generated by 49,000 people at the event’s peak, with visitors using apps to share photos and videos. In total, more than 145,000 people attended the three day event, which was not named.

At peak times, there were up to 600 simultaneous TD-LTE users being handled per small cell, which is more than traditional technology, Nokia claimed.

Bu Tong, General Manager of Network Department, China Mobile, said: “China Mobile’s TD-LTE initiatives are driven by our vision to leverage future-ready technology for offering an unmatched service experience, despite challenges posed by the ever-increasing load on our network. Nokia Networks has further consolidated its position as one of our most trusted partners by achieving yet another global landmark and enabling us to deliver a truly rewarding mobile broadband experience at this high-octane sports event.”

Mark Atkinson, Vice President Small Cells Business Line, Nokia Networks, said: “In addition to setting a new landmark in TD-LTE, we have also bettered our own record achieved at the world’s first live TD-LTE network deployed for China Mobile at the same event in 2014. The incredible performance substantiates the capabilities of our small cell portfolio in helping operators overcome obstacles posed by data traffic at mass events as they deliver memorable moments to subscribers.”