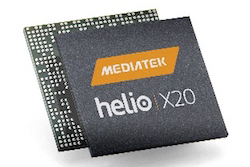 The deca-core HelioX20 contains a “Tri-Cluster” CPU architecture by MediaTek, which consists of one cluster of two 2.5GHZ ARM Cortex-A72 cores and two clusters of four ARM Cortex-A53 cores. Each run run at 2GHz and 1.4GHz respectively.

Also onboard is a new version of the manufacturer’s Corepilot management technology.

Version 3.0 schedules tasks for the chip’s CPUs and GPU while managing power, in order to prevent overheating.

MediaTek said the spec of the HelioX20 allowed for mobile device features including dual 3D cameras, 120Hz displays and support for 4K video.

“We are excited to see device manufacturers raise the bar – in camera, display, audio and other consumer features. MediaTek has been adding innovative multimedia features to our platforms since the very beginning, enhancing the overall computing and multimedia experience as part of our strategy to put leading technology into the hands of everyone.”

The HelioX20 will enter sampling stage in the third quarter of 2015, with a commercial launch pinned for early next year.

The launch will put more pressure on market leader Qualcomm, which is under threat from smaller players moving up through the ranks of the mobile SoC market.