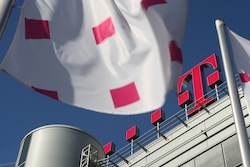 Deutsche Telekom hit internet speeds of 1.2Gbps during a trial of LTE-Advanced Pro with Nokia in Warsaw, Poland, last week.

The trial set a record for LTE-Advanced Pro speeds, it said.

T-Mobile Polska and Nokia reached the mark in the Polish capital by aggregating four carriers on the 1800MHz, 2100MHz and 2.6GHz bands together with 4x4MIMO technology.

The trial used Nokia’s latest generation of base stations.

Deutsche Telekom has worked with Nokia’s R&D centre in Warsaw, which employs 2,700 engineers, on developing software and applications for 3G, LTE and LTE-A mobile networks.

The Germany-based operator said the trial was a link stage in the deployment of next generation mobile networks.

“It builds a bridge to 5G,” it said in a statement, which establishes the basis for future requirements of new mobile services, including 4K high definition video, virtual reality or the new generation of mobile gaming.

Bruno Jacobfeuerborn, Chief Technology Officer at Deutsche Telekom, said: “We’re not missing out the step in between. In Poland, we’ve now been able to show what’s possible on the basis of LTE technology and the direction development may take.”

Nokia has had a flurry of announcements in recent weeks about advancements to its LTE tech.

In work with SK Telecom in Korea, for example, the vendor said it has developed the ‘world’s first’ all-in-one Public Safety-LTE network system for use by emergency services; a compact LTE mobile network that can be carried in a backpack, and set up in less than three minutes.