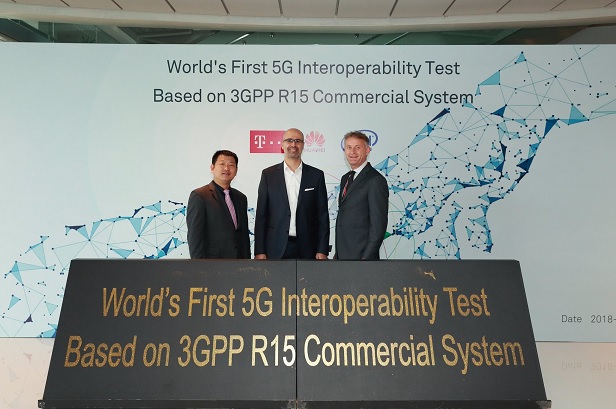 Deutsche Telekom, Huawei and Intel have demonstrated interoperability between their equipment based on the latest 5G standard.

The vendors verified the synchronisation, coding, frame structure and numerology components in the connection between their hardware.

The configuration used the largest cell bandwidth and the latest Massive MIMO multi-antenna and beamforming technology defined by the standard.

Deutsche Telekom provided the trial with the settings that are typical of its network architecture, ahead of 5G being tested on the operator’s live network.

The three parties said they would continue to collaborate to build standardised 5G products.

“The success of our test is a significant step on the path to 5G ecosystem maturity and early 5G commercialisation.”

Yang Chaobin, President of 5G at Huawei, said: “The success of this testing shows that Huawei and all parties have devoted themselves deeply to the new NR standard.”

Asha Keddy, GM of Next Generation Standards at Intel, said: “Intel has been actively working with leading 5G companies to take advantage of Intel’s unique end-to-end 5G NR technology and to accelerate 5G testing and commercialisation based on the latest 5G NR technology.”

The trial comes after 3GPP’s members completed the first standard for 5G non-standalone New Radio at a meeting in Lisbon on 21 December, providing the model and principles for enhanced mobile broadband use cases with a heavy focus on network slicing.

Immediately afterwards, Ericsson and Qualcomm said they had demonstrated interoperability between their products based on the newly approved standard. The showcases took place at the Ericsson Lab in Kista, Sweden, as well as Qualcomm’s lab in the US, using the 3.5GHz and 28GHz spectrum bands.

2018 will see early deployments of 5G technology ahead of full standardisation in 2020, including at the Winter Olympics in South Korea in February.