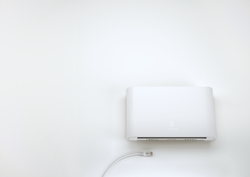 Ericsson has launched a “tablet-sized” indoor small cell with carrier aggregation, featuring double capacity and the ability to deliver LTE speeds of up to 300Mbps.

The RBS 6402 picocell is designed for use on smaller sites, with the vendor advising it has been optimised for use in buildings up to 5,000 square meters in size.

Ericsson claims the cell delivers “the most flexibility on the market”, supporting multi-standard and mixed-mode capabilities, including LTE, WCDMA and Wi-Fi, in addition to 10 different frequency bands.

The cell can automatically shift its connection between 2G, 3G, LTE and Wi-Fi networks to leverage speed and conserve bandwidth.

It also features a plug-and-play setup approach, with the Ericsson claiming the RBS 6402 can be network-live in 10 minutes when hooked up to an existing Ethernet connection thanks to a cloud-based configuration, thereby reducing the need for on-site equipment and expertise.

The company adds that its picocell “leverages LTE-Advanced, supports VoLTE Remote software activation of frequencies, bands and features [and] eliminates the need for site visits in conjunction with refarming or acquiring new spectrum”.

Johan Wibergh, Head of Segment Networks at Ericsson, said: “With the Radio Dot System, we redefined the small cell architecture to address a wide range of underserved buildings, but we knew we still had to crack the price-performance barrier for smaller venues.

“Now, the RBS 6402 cost-effectively serves the needs of smaller sites, which we estimate account for approximately 10 million buildings worldwide.”

Ericsson’s Radio Dot System was announced in September 2013 as a means of addressing the issues faced by in-building network coverage.

According to Ericsson, current indoor solutions are mainly aimed at improving voice coverage, meanwhile problems with cost and scalability have prevented operators from devising a solution that meets the demands of data-heavy services and applications.

At Mobile World Congress in February, the vendor launched its small cell as-a-service portfolio, which uses short-range access nodes to boost network performance in high-data-traffic areas such as shopping centres and stadiums.