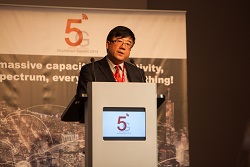 Vendors and operators need to cooperate on software and systems to regain Europe’s prominence in the telecoms market with the advent of 5G, a conference has heard.
Delegates at Huawei’s 5G@Europe summit, held in Munich on Monday, were told that a range of technologies – including MEO satellites using Ka-Band Multibeam, massive MIMO, densification of small cells and intercell coordination – could be used to help deliver the expected thousand-fold surge in capacity that 5G will bring.
Huawei is predicting the technology will start to be commercialised from 2020 and work is underway on prepping it.
Delegates were told how 5G represented an opportunity to rethink how networks work. Unlike previous generations of wireless technology, networks should not expect an increase in revenue from 5G.
Stephen Temple, visiting professor at Surrey University’s 5G department, thinks it will provide a means to think about how a network is put together. He said: “The core of 5G is a massive revolution in efficiency. The internet has won; we can’t wrestle that back and create a closed environment. If you look at the investment needs, the revenues of the operators don’t add up. That’s why I put efficiency at the core of 5G.”
Dr Wen Tong, Vice President of Wireless Research and CTO of Wireless of Huawei Technologies, said between four and 10 times more spectrum will be required to cope with 5G. He said it is more likely to have enterprise appeal, rather than consumer, which will affect how the networks are built.
He commented: “What is dramatically different is the technology that will be deployed will have to be deeply integrated with big data. That will be the driving force. When you connect to big data, we won’t be in a simple connected society, it will be more of a digital society.”
According to Huawei, 5G will bring in virtualised cloud computing, with the Internet of Things expected to hit up to 100 billion connections by 2020.
However, Peter Merz, Head of Radio Systems at Nokia Solutions and Networks, is of the opinion that the new networks need to be built with 2040 in mind, rather than the short term.
He said: “Densification is a means of meeting 5G demand by developing and deploying a new radio access technology. It’s optimised for lower latency experience.”
Thomas Haustein, Head of Department Wireless Communications and Networks at Fraunhofer HHI, argued millimetre wave would be a “hot topic” for 5G but would have a knock-on effect on the likes of antenna design, efficiencies, cost and how to integrate low frequency spectrum onto the cellular node.
Meanwhile, Professor Sergio Benedetto, Digital Communications at Politecnico di Torino, said massive MIMO would be required for a 5G network to work.
Ultimately, said Björn Ottersten, Director for the Interdisciplinary Centre for Security, Reliability and Trust at the University of Luxembourg, vendors and networks need to be better at using spectrum. He said that companies need to be open to more innovative technology, citing the example of 03B’s MEO satellites that deliver coverage in emerging markets through Ka-Band multibeam.
Executives from both Vodafone and EE said 5G needed to be complementary to existing radio frequency and enable new services.
Paul Ceely, head of network strategy at EE, said: “It needs to be very efficient to build, very low cost and built on the infrastructure we have. It needs to be very easy to provision because, with the internet of things, if we have to provision everything individually it will be impossible to roll out because of cost.”
There was sympathy from Huawei for this view, with Dr Tong saying: “The technology has to integrate with all pieces of the spectrum… this will be even more critical as more types of application come in so we don’t need to rip up your network.”
Huawei is part of the METIS consortium, which is coordinated by Ericsson and co-funded by the European Commission, which is working on developing standards for 5G.
The EC’s Thibaut Kleiner said it would only support collaboration between companies that were open and supported fresh entrants: “We need to make sure that the [European] telecom industry takes the lead again.”
However, Michael Dowling, from research agency Munchner Kreis, warned: “If cooperation goes too far, you end up with monopolies and it stifles innovation in the longer term. GSM was an example of how Europe was able to cooperate and then compete.”
Read more:
Ericsson CTO: 5G is about integrated wireless technologies, not just speeds
Share
Facebook
Twitter
Linkedin
Pinterest
WhatsApp
Previous articleEricsson unveils small cell as-a-service and virtual Evolved Packet Core
Next articleSmartphones outpace feature phone sales for first time as smart bands grow