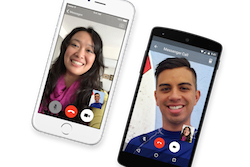 The addition allows users to make video calls over a cellular or Wi-Fi connection from within the Facebook Messenger app, which already offers HD voice calling.

The move puts the social network in direct competition with the likes of Apple’s FaceTime and Skype, both of which offer video and VoIP calling.

Facebook’s service is interoperable between different handset types. However, the company said users will be charged for data if they aren’t connected to Wi-Fi while making a call.

Video calling in Messenger is now available on iOS and Android handsets in European markets including France, Portugal and the UK, as well as in the US, Canada and Mexico amongst other countries.

Hello integrates a dialler with the social media site, the idea being that it can provide users with more information on incoming calls as well as giving them more control over who can contact them.

For example, the app will display caller ID on incoming calls from unknown numbers and, where available, will show the number of Facebook users who have previously blocked it. Users can then block such numbers accordingly.

Facebook’s search function is also available from within the app, which links itself to the Messenger app on users’ mobile devices.

Hello is currently only compatible with selected Android devices.

At this year’s Mobile World Congress, Facebook revealed it was working with a number of major players from the telco industry to explore LTE Broadcast technology.

It is hoped LTE broadcast will help offset the impact of a predicted explosion in video traffic on LTE networks.

Mobile data traffic to increase 40 percent by 2020 when video will rule, says Ericsson