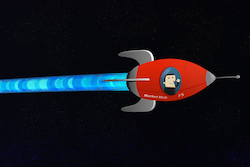 Given the ever-increasing hype surrounding the Internet of Things, it is perhaps fair to look at the sector with a sceptical eye, especially when the Chairman of the International M2M Council (IMC) says suggestions of it enabling a "Jetsons" style world are wide of the mark.

The futuristic 1960s cartoon promised a world of intelligent home appliances, many of which would not look out of place among the products being touted presently.

However, Alex Brisbourne, KORE CEO and IMC Chair, says a degree of realism is long overdue. His first solution was suggested with tongue firmly in cheek. He says: "The first thing is we should shoot a lot of analysts."

More seriously he goes on to say: "There are some very very wacky predictions from the market side." Talk of millions, billions or trillions of connections obfuscates the real issue of how the sector will actually work.

Brisbourne says: "We need to define what the market really is. If you count every individual sensor on a device, you start to believe that figures such as 50 billion are not phantasmagorical. Some devices could carry between 50 and 60 sensors."

For the industry to work and achieve the potential it promises, Brisbourne argues the conversation needs to switch to being "user driven" instead of "vendor driven". He says the hype surrounding smart fridges that order milk for a customer, for example, may not actually be something people want. "It's Jetsons' type stuff but it's not in line with human nature," he says.

Pushing cutting edge devices towards the customer, regardless if they want them or not, is a waste of time and resources. Brisbourne cites how videophone technology was developed by AT&T's Bell Labs back in 1964, with the technology originating in Germany in 1930s. Just because a device can be invented does not necessarily mean that the market will be there at that time.

He says the danger with the hype cycle is that it could shorten the life of the sector, as consumers and businesses get excited, then sick of products much more quickly. Brisbourne recalls what happened with the netbook market: "There was a huge amount of hype but the entire market has gone from non-existent to huge to dead in a number of years."

He says the evolution of what was commonly called the M2M market to the IoT has been a "helpful evolution" of the sector. "Nobody goes out in the morning and says ‘I must go out and buy an M2M application.’ What they want is make their staff on their transport teams more efficient for example," Brisbourne claims.

However, he describes M2M as having a more practical use, "the sharp end of the arrow" as he puts it. "M2M is the special delivery of an application and solution for which there is a value attached, whether it's saving or making money. This could be waste disposal or packages being delivered."

He says the role of the IMC is to help its 5,000 members, including operators Deutsche Telekom and AT&T, to share experiences and discuss the best ways of making the potential translate into a market reality. Despite the multitude of products under way, Brisbourne says: "There's still a reasonable level of complexity in pulling all of the constituent parts together to turn an idea into a solution."

Issues regarding security, privacy and standards are still to be effectively dealt with. He says discussions between members can lead to being able to demonstrate where the value lies within the IoT.

Overall, Brisbourne is excited about the sector's potential but feels the hype has derailed the debate somewhat. He says expectations of tens of billions of connected devices could mask real tangible success: "Where the wheels come off is when people are disppointed by ‘only’ two billion devices."

Ultimately, what he hopes for is an IoT that benefits the real world, not some cartoon.