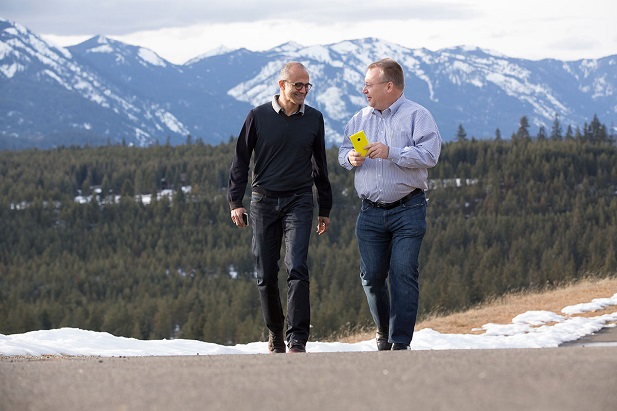 It's fair to say that Microsoft's acquisition of Nokia's handset business has not reinvented the smartphone game, but developments this week show it still manages to dominate the headlines.

First, it was announced Stephen Elop, who was seen as Microsoft's double agent when he was in charge of Nokia, would be leaving the software giant. Elop jumped ship to become the first non-Finnish Nokia CEO in 2010. His time in charge saw the one time market leader's market share crumble in the face of Apple and Android, alongside substantial losses and swathes of staff losing their jobs.

Elop rejoined Microsoft as part of it buying Nokia's handset business, bagging a none too shabby €18.8m bonus in the process. And now he has stepped down as the head of Microsoft Mobile, along with former Nokia executive Jo Harlow. Mobile is a key part of CEO Satya Nadella's strategy but clearly the figures have not matched his ambition.

Meanwhile, at Nokia, fresh from announcing its multi-billion tie up with Alcatel-Lucent, its CEO announced that actually, mobiles are worth playing with again. Rajeev Suri said once a prior agreement with Microsoft expires, Nokia will look to design handsets and license its name to partners. We're praying for a smartphone with a 3210's battery life and stock Android software.

Speaking of old classics running Android, rumours have surfaced regarding the Google operating system being used on a forthcoming BlackBerry device. Will it be enough to turn out the one-time enterprise king's smartphone fortunes? We're on the fence but will point out as a coincidence that this week marks the launch one year ago of the ill-fated Fire Phone, Amazon's attempt to use Android to crack the smartphone market. It didn't catch on, to say the least.

Qualcomm's MuLTEfire caused a lot of debate in the Mobile Europe offices, mainly about how the heck it is pronounced. The spectrum aggregation technology is the chipset giant's latest move in the LTE-U sector, an area that is generating great excitement among vendors and operators, and great annoyance among Wi-Fi players.

MuLTEfire (multifire? Moo-ell-tea-ee-fire?) is unlikely to calm them, as it will aggregate unlicensed spectrum, “combining the performance benefits of LTE technology with the simplicity of Wi-Fi-like deployments”. Regardless of how you pronounce it, Qualcomm's new play for unlicensed spectrum will ruffle the feathers of some Wi-Fi players.

Virtual reality was a big theme of the annual video game jamberoo E3 this week along with the usual Call of Duty: Infinity and FIFA: Brown Envelope Edition announcements.

Facebook, Google, Microsoft, Sony and HTC have already earmarked this sector as one to watch. Last year, the former found a loose $2 billion down the back of the sofa to buy Oculus Rift.

Such moves could soon pay off, according to CCS Insight. The research firm forecast that 12 million VR headsets will be sold in 2017, with the augmented reality smart glasses market worth $1.2 billion by the same point.

Google's Nest revealed its latest connected home device this week. Nest Cam can capture full HD video and has night vision, making it easier to pick out intruders’ faces and bag marked 'SWAG' as they take a crowbar to your patio door. This can then be uploaded and stored on the company’s new Nest Aware cloud service, with Nest also piloting the ability to stream footage directly to YouTube.

We end with noted telecoms watcher Oscar Wilde, who once (almost) said: "To lose one board member may be regarded as a misfortune; to lose both looks like carelessness." Yet this was the case with Telekom Austria. Just months after CTO Gunther Ottendorfer made a shock exit from the company, CEO Hannes Ametsreiter said he was off, with the news breaking a few days later he was joined Vodafone Germany.

Wireless Week is a new feature from Mobile Europe rounding up the best of the rest in mobile. If you don't follow us already on Twitter, you really should. We're @mobileeurope