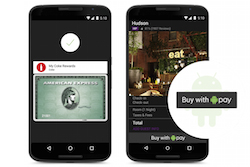 Google has lifted the lid on its next mobile OS update at its annual I/O conference in San Francisco, alongside a new IoT platform and its latest attempt at cracking payments.

Project Brillo is an IoT platform derived from Android and based on a communications protocol developed in partnership with Google’s home automation arm, Nest.

The protocol, called Weave, employs a shared set of APIs to enable interoperability across manufacturers and different operating systems, including iOS.

OEMs using operating systems other than Google can connect their devices to Brillo by adding a compatibility library for Weave, which Google said provides a “core set of schemas” to enable apps and devices from different manufacturers to interact with each other. Connected devices can then communicate locally using Wi-Fi and Bluetooth Low Energy, as well as via the cloud.

Google said it is also integrating voice recognition capabilities into its IoT platform, which will be available toward the end of 2015.

The majority of Google’s attention appears to have gone into improving the user experience. The company said it has boosted battery life in addition to introducing a new feature called Doze, which kills background tasks if it detects that the device has been left unattended for a certain period of time.

Its personal assistant service, Google Now, has been brought even more to the forefront of the Android experience. Now on Tap allows users to access Google Now without leaving an app and can provide contextual assistance relating to whichever app they’re in. For example, if a user is discussing dinner plans within a messaging thread, Google Now will be able to offer advice on local restaurants, find menus or book tables, according to Google.

Support for fingerprint authentication has also been introduced with Android M, as have improvements to app permission management.

Google also revealed Android Pay, the company’s home-brewed payments system that it no doubt intends to position as a direct competitor to Apple Pay.

Google’s system leverages both NFC and host-card emulation, allowing users to pay for goods simply by holding their phone over compatible merchant terminals and negating the need for an accompanying mobile app. Much like Apple Pay, Android Pay also brings an option that allows users to pay for digital goods in other apps using Google’s payment system. The company said it is working with a number of payment networks and financial institutions to ensure “industry standard security tokenisation.”

Google confirmed that Android Pay will come pre-installed on Android M handsets when it’s released later in the year. However, it will also be available in app form for older Android handsets via the Play Store.

Android Pay is Google’s latest attempt to get mobile payments off the ground after its predecessor, Google Wallet, failed to catch on in earnest. It also offered the ability to make contactless NFC payments and send and receive money via the app.

Earlier this year Google bought Softcard, the payments joint venture run by US operators, as it looks to reinvent its payments system.

Google also revealed that 35 car models will offer its Android Auto in-car system by the end of the year, with big names like Audi, Ford, Renault and Volkswagen all pledging support.