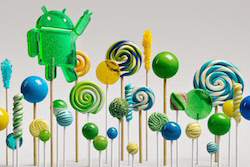 Google has launched an update to its Android operating system, offering smartphone and tablet users the ability to use multiple SIMs and HD voice calling.

Updates will be rolled out to Google’s suite of Nexus devices in the coming weeks, with other Android handsets and tablets to follow.

Other features of Android 5.1 include a Device Protection security feature. If a user’s Android device is lost or stolen, it will stay locked until it is signed into with the relevant owner’s Google account. This security feature will work even if the device has been restored to factory settings.

The company has also rolled out a new set of APIs for developers for the OS, as well as tweaking the ability to join Wi-Fi networks and control Bluetooth devices from the Quick Settings menu.

Last week, Sundar Pichai, the company’s Senior Vice President for Google, Chrome and Apps said it was planning to launch a small scale MVNO in the United States, as it looked to explore network technology. Reports following his keynote at Mobile World Congress claimed the company wanted to make the MVNO service only available to those who own its Nexus products.

According a report from Kantar Worldpanel ComTech, 67.2 percent of smartphones sold in Europe’s top five countries in the three months to the end of February were running Android. This was down 2.2 percent year-on-year.

Dominic Sunnebo, Business Unit Director, said: “Great Britain was once again the market that recorded the sharpest drop in Android share. However, a more stable performance by Samsung was able to hold share quarter-on-quarter and an improved performance by Motorola and HTC helped overall Android sales.”