MWC: Google to launch drones in coming months, teams up with operators 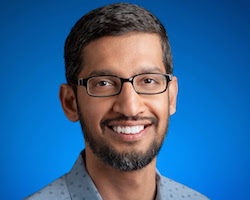 Google’s army of drones will make its first flight in the coming months as it looks to connect remote regions, with the company’s digital chief saying it could extend to Europe.

Speaking at Mobile World Congress, Sundar Pichai expanded upon the company’s plans to target the estimated four billion people without internet coverage or who otherwise have poor access.

Pichai described Google’s fleet of drones and balloons as effectively being stitched together to offer blanket coverage globally.

First announced in 2013, Project Loon has been trialled in New Zealand, where hot air balloons deliver 3G. Pichai outlined how the project has evolved, saying: “[At the start] we could barely keep balloons up for five days…now it’s as much as six months.”

He also explained that Loon now delivers LTE as well as 3G, while the area covered by the balloons has increased four-fold.

Google has partnered with Telefónica in Latin America, Vodafone in Europe and Telstra in Australia to fuel further development of the project. Pichai said there was “huge opportunity” in bringing the balloon and drone projects to Europe and North America.

The company faces competition in this area from Facebook, whose CEO Mark Zuckerberg is due to speak at MWC in Barcelona later today [Monday].

Last year, Facebook was beat by Google in the race to buy Titan, a company that builds solar-powered drones.

When asked about the differences between the visions of the two companies, with Facebook’s Zuckerberg advocating its Internet.Org connectivity plan, Pichai said: “No one company can do this,” adding that where Google differed was its focus on infrastructure through its fibre initiative.

One critic of the drone programmes is the GSMA, whose Director General Anne Bouverot last year labelled Facebook’s plans “scary” and Google’s impractical.

Pichai was also asked about reports claiming a Google MVNO could be launched in the United States. He made reference to its Nexus programme of using hardware to “drive innovation at the point of hardware and software”, saying that those devices, which have been built by manufacturer partners, are never sold at scale.

Pichai said: “We do it at enough scale to achieve an impact.”

He also added that connectivity would be a useful way of pushing fresh innovation, citing the example of making movement between Wi-Fi and cellular networks seamless.

He said: “Think about hardware, software and connectivity together. We want to be able to experiment along those lines. We don’t intend to be a network operator at scale.”

Pichai said that more details would be revealed in the coming months, which suggests a possible launch at its I/O conference in May.

“We want to drive a side of innovation that the ecosystem should allow. We’ll do it at a small scale and hopefully carrier partners will adopt it.”