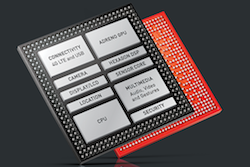 The technology uses a biometric integrated circuit, custom-built sensor technology and algorithms, which are managed by SecureMSM. It is designed to be compatible with Qualcomm’s Snapdragoon 400, 600 and 800 series of processors.

According to Qualcomm, the technology scans through potential contaminants on the finger, such as sweat, condensation or hand lotion. The company added it can also detect unique characteristics such as fingerprint ridges or sweat pores.

The first handsets to feature the security function are expected to be released later this year.

The processor will feature Qualcomm Technologies’ 64-bit CPU architecture and will start sampling by the end of this year.

Among the features of the Zeroth platform are the ability to take better quality images and videos. A smart learning feature can power smart cameras that can recognise text and handwriting.

The platform is optimised for the latest LTE, Wi-Fi and Bluetooth connectivity and delivers behavioural analysis that can protect against new malware and increase security.

Cristiano Amon, Executive Vice-President, Qualcomm Technologies, said: “The premium mobile experiences of the future will extend beyond traditional features and functionality and be defined by devices that have the ability to learn and adapt to the needs of the user, through fully harnessing the growing levels of compute, multimedia and connectivity in our mobile devices.

“Zeroth intelligence will scale across a wide range of implementations from automobiles, wearables, smartphones and client computing and have a learned personalisation that has the ability to transfer across devices and as a consumer upgrade to the next generation.”

Qualcomm also revealed it is providing the Atheros powered Wi-Fi solution for LIFX’s forthcoming family of smart lights. The White 800 range allows consumers to change home lighting from any smart device. The lights are compatible with the AllJoyn open-source connected home framework.