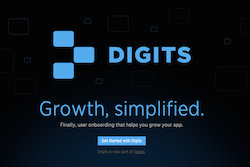 Digits, a new password-free login technology from Twitter, has won the approval of the GSMA, who said the technology “demonstrates the benefits of mobile in protecting our identities”.

Digits was announced by Twitter earlier this week, and offers mobile users a two-step option to sign into apps by using a combination of phone number and text message.

It is thought that the technology can be used by developers to encourage users to sign up for new services by negating the need to enter “cumbersome” login details, which can be forgotten or lost, or share their social media credentials with apps they are not familiar with.

By using SMS verification instead of passwords, it is claimed Digits can minimise sign-in failures – which can lead to a loss of customers – as well as maintain low support costs.

Additionally, by using phone numbers in the place of other verification methods, developers can tap into emerging markets to exploit the huge growth in mobile demographics.

Developers can integrate Digits into their apps simply by encoding a few lines of on-board code, and claims to offer the same level of security as more established phone-based onboarding systems. It also negates the need for captchas to keep out spammers.

Commenting on the technology, Marie Austenaa, vice president and head of the Personal Data & Mobile Identity programme at GSMA, said: “Users are becoming wary of using social login mechanisms for accessing services and apps. There is a growing mistrust as a result of the ambiguity and lack of transparency into exactly how their information is being shared.

“Twitter’s new solution taps into the security and convenience mobile devices provide, further demonstrating the diverse applications and benefits of mobile in protecting our identities. Providing an alternative sign-in option and enabling consumers to regulate what, how and when they share information with any given company gives them back an element of control in an age where the monetisation of customer data has unfortunately become the norm.”

In its third quarter results, Twitter posted revenue growth of 114 percent over 2013, pulling in $361 million (€283 million). The number of active users rose 23 percent to 284 million over the same period.