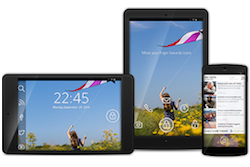 Russian mobile operator MTS will offer its Android customers special offers and tailored content, thanks to a new custom interface running on handsets.

Celltick’s Start is an interface that gives customers access to their favourite and most recently used apps on their homescreen, as well as social media information, news and weather and web search.

The product uses a combination of big data and collaborative filtering to adapt each smartphone user’s screen according to their behaviour.

Maksim Marasanov, Head of Core Based Services Department at MTS, said: “Start gives us opportunity to be able to provide our subscribers with a unique experience that shows our commitment to providing them high value.”

Celltick has more than 110 million active customers across 25 countries. Last year, the company said it enabled “billions” of mobile commerce sales of physical and virtual goods.

The announcement came as Android strengthened its dominance across the five largest European smartphone markets, according to the latest figures from Kantar Worldpanel ComTech. It had a share of 73.9 percent during the third quarter of this year, up 1.4 percentage points on 2013.

Apple’s iOS also made gains, with both Google and the iPhone maker benefitting from the slump in demand for rival operating systems. It held a share of 15.4 percent at the end of September, up 1.5 percentage points on the previous year.

Dominic Sunnebo, Strategic Insight Director at Kantar Worldpanel ComTech, said: “Across the major European markets, where the new iPhone models were made available between the 19 and 26 September, initial sales of the new iPhone models have overwhelmingly been from existing iPhone owners (87 percent).

“This is not surprising as consumers who already own Apple products tend to remain loyal and are keen to get their hands on new models. Drawing in customers who are switching from competitor brands is more likely to happen once offers and promotions on the new iPhones start to kick-in.”

Google pushes Android to live in a material world