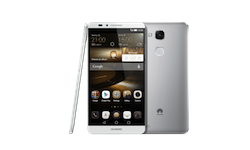 The sensor, located on the back of the device, can store up to five sets of fingerprints that can be allocated for personal and “guest” modes.

This allows users to secure private folders and files and authenticate mobile payments.

Huawei claims the scanner, which can also be used in the place of a password to secure the phone, also enables users to unlock the device 80 percent quicker than devices using “sweeping” fingerprint unlocking, such as Samsung’s Galaxy S5.

Data registered on the 508PPI sensor is encrypted by ARM TrustZone technology, before being stored directly on the chipset to prevent access from third-parties.

Its single-touch functionality is similar to that of the TouchID sensor on Apple’s iPhone 5S.

Elsewhere, the Mate7 features an octa-core Kirin 925 processor consisting of four Cortex A15 and four A7 chipsets, a 6-inch Full HD display, 13MP camera and a 4100mAh battery.

Huawei announced a price tag of €499 and availability in European markets from Q3 2014.

The Moto G will come running Google’s Android Wear platform, announced at May’s I/O conference. Google said at the time it hoped the OS would unify the look and feel of Android wearable devices.