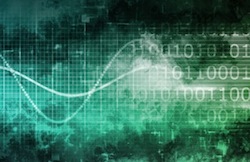 Light communications company pureLifi has achieved “unprecedented” data rates when transmitting data from LED bulbs and talked up the technology’s ability to be a key enabler of the internet of everything.

The technology, known as Li-Fi, provides networking capabilities that are similar to Wi-Fi, but with a significantly greater spatial use of bandwidth.

Tests also showed how data could be transmitted in an energy efficient way using LEDs and how illumination was not needed in uplink transmissions from a mobile device to an access point.

PureLiFi, which was spun out of the work done by the University of Edinburgh, said data could be transferred via off-the-shelf LED light bulbs. The university’s professor of mobile communications Harald Haas serves as pureLiFi’s chief science officer and co-founded the business.

He said: “We’ve established that we can still transmit data wirelessly at data rates close to 100 percent when lights are dimmed to levels where they appear to be switched off altogether. This is a massive breakthrough in Li-Fi, developed by way of a radically new algorithm, and is a positive indicator for the development of the Li-Fi industry as a whole.

“This latest development furthers the case for Li-Fi revolutionising wireless communications, helps keep pureLiFi at the forefront of research and commercialisation and shows that Li-Fi really could be the enabler of the Internet of Everything.”

pureLifi’s Li-1st system, which uses an IP-enabled ceiling unit that can be connected via USB to a client’s devices, was launched in January and claims to be the world’s first commercial Li-Fi product.