MasterCard teams up with Kalixa, DeviceFidelity for NFC microSD m-wallet 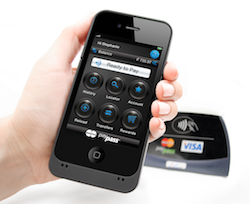 MasterCard has announced the launch of a new prepaid mobile wallet enabling NFC payments to be made on any handset, be it an Android, BlackBerry or even iPhone.

The moneto m-wallet uses patented microSD technology by DeviceFidelity to create an embedded secure element that is placed in the microSD slot of the smartphone handset for Android and BlackBerry devices.

For the Apple iPhone, which has no microSD slot, a case has to be put onto the phone that contains the microSD technology in it, as well as a portable phone battery charger.

In order to make NFC payments, similar to EE’s new “Cash on Tap” partnership with MasterCard, consumers can link any type of payment source to the app on their phone, which has to be authenticated with a four-digit pin each time before tapping the phone on contactless POS terminals.

There has been much debate this year about how likely the uptake will be for NFC when used for mobile payments (see: MWC 2013: NFC might not be dead in the water after all?).

One topic of contention is about who will have control of the embedded secure element in an NFC-enabled handset – the device manufacturer or the mobile operator.

Payments issuer Kalixa is powering the issuing, processing and acquiring technology in moneto, together with MasterCard’s PayPass technology.

“We’re giving the customer the control over when the smartphone is NFC-enabled as the NFC aspect is activated by the app, making it more secure. It’s a question of how do we manage this roll-out, how does the customer feel confident about having a payment applet on their phone.”

Kalixa already has over 150,000 consumers using its contactless prepaid payment cards and is expanding into contactless watches that can be used to make payments, so smartphones is the next step.

Initially the product will be available to buy on its website, but it is also designed to be stocked over-the-counter at phone resellers, supermarkets and electronic stores.

Although the initital push will be in consumer retail, Kalixa is keen to talk to operators too.

“A lot of the MNOs don’t want to go into the regulation area, because by doing that, there are issues like validating customers on pay-as-you-go, so it’s like opening up a can of worms,” said Vaghjiani.