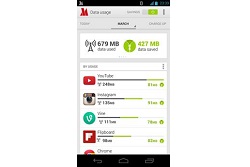 MediaTek is embedding data compression software onto its LTE system on a chip, allowing consumers to consumer half as much data as on their normal monthly plan.

The chipset maker will ship its 64-bit LTE SoCs MT6752 and MT6732 chips with Opera Max. The software uses data compression technology to reduce the size of video, photos and text on a smartphone by up to 50 percent. MediaTek said the software also makes videos run faster and spend less time buffering.

Consumers are able to monitor their data usage across their apps via a dashboard, which allow gives them the ability to control their data settings.

According to figures released from Cisco earlier this year, data consumption grew by 57 percent across Western Europe during the past 12 months, thanks to the high penetration of smart devices. Global mobile data traffic across the region has been predicted to grow by a compound annual growth rate of 50 percent between 2013 and 2018.