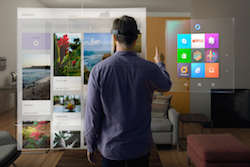 Microsoft has unveiled its latest computing platform, unifying its product ecosystem while bringing digital assistants and holographics to the fore.

Windows 10 uses a shared code database that Microsoft said ensured a consistent user experience across its laptops, tablets, consoles and smartphones, in addition to wearables and other connected devices.

It effectively marks the end of the Windows Phone brand, with the operating system across all of Microsoft’s products now being called Windows 10.

The company said it has adopted a “mobile-first, cloud-first” approach with its latest platform, centred around mobility and more personal user interactions through voice and gesture input.

The operating system also brings support for “holographic experiences”, Microsoft revealed, including a set of APIs that will allow developers to create augmented reality (AR) experiences for Microsoft’s new HoloLens headset. This is a set of HD googles that include an integrated SoC and sensors to let users view hologram-like projections in the world around them.

According to Microsoft, the device works as an untethered unit, meaning HoloLens does not require a connection to a Windows 10 PC or similar device to work.

Microsoft said: “By placing three-dimensional holograms in the world around you, Microsoft HoloLens provides a new view into your reality that can tell what you are looking at and understand what you are saying with your hands and voice.

“By putting you at the centre of the computing experience, Microsoft HoloLens allows you to create, access information, enjoy entertainment and communicate in new and exciting ways.”

Universal apps for photos, videos, music, maps, and messaging services help maintain a consistent experience from device to device, while the new-look browser – which will see Internet Explorer slowly phased out – allows users to more easily annotate and share content.

Windows 10, due out later in 2015, will be available as a free download to Windows 7, 8.1 and Windows Phone 8.1 users who upgrade within the first year of its release.

Terry Myerson, EVP of the Operating Systems group at Microsoft, said: “Everything about Windows 10 — the experiences, delivering it as a service and the free upgrade — means that Windows 10 isn’t just another product, it’s an ongoing relationship — one that will give ongoing value to all our customers.”

“The new generation of Windows is a commitment — a commitment to liberate people from complex technology and enable them to do great things.”

However, Microsoft’s more lofty proposition have drawn words of caution from some analysts.

Geoff Blaber VP Research at CCS Insight, commented:  “HoloLens is an entirely new platform for immersive, holographic virtual reality experiences. This will spark yet more excitement for the category but the true innovation it delivers will be determined by developer commitment in the months and years to come.”

Blaber also questioned the proposition of a “one size fit all” platform that is at odds with Apple’s approach. The iPhone maker adopts two distinctly different software experiences across its computer and device ecosystems.

Blaber said: “In a technology industry too frequently defined by “me-too” innovation we are seeing Apple and Microsoft adopt two very different paths to the future of computing. Microsoft must now convince developers and consumers that one size really can fit all in the case of Windows 10.”

Microsoft gets smart with data and Wi-Fi in Windows Phone 8.1