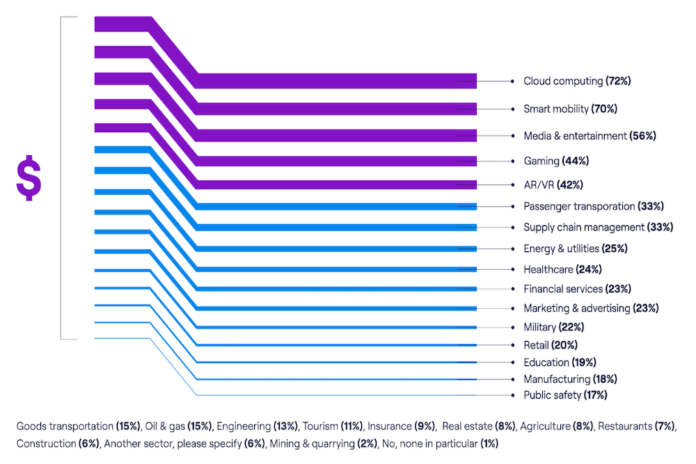 Venture capitalists and investors identify five areas most likely to get their $59 billion – the cloud, smart mobility and alternative realities

Investors will put $59bn into the 5G this year, with the largest portion going on cloud computing, according to a study commissioned by service provider World Wide Technology (WWT). The study asked 100 investment agents, venture capitalists and investors what areas of technology they would invest in, if the conditions are right. Of the 100 in the sample, 92 per cent said they would invest in 5G. The top five categories for likely investment were identified as the cloud (approved of by 72 per cent of the survey sample), smart mobility (with 70 per cent recognition), entertainment/media (56 per cent), gaming (44 per cent) and augmented and virtual reality (42 per cent).

They’ve got their bread in the cloud

Disappointingly perhaps, the two industrial sectors that could actually catalyse wealth generation and productivity, Health and the Supply chain, were not listed as top five priorities for 5G investment, being ranked sixth and seventh. The respondents were reportedly ‘bullish’ about the prospects for mobile operators and service provider in the 5G era. When asked, ‘can you name any 5G-enabled companies that are expected to make it big in the next 12 months?’ 41 per cent of investors replied by naming an operator. However, mobile network operators came second to suppliers of components and hardware who were named by 47 per cent of the survey.

A survey sample of 92 companies, taken from unnamed employees, is not always statistically significant. However, Victor Holmin, director of discovery and innovation at World Wide Technology, said: “Now is the time to invest in the foundational technologies of 5G. Our research has clearly shown that there is clear excitement in 5G among investors – and that these five sectors in particular are ripe for growth.” Holmin had a message for mobile network operators. “Service providers need to make the investment in foundational technologies, such as Edge, and look to build a platform that will enable them to deploy services which can build the promise of 5G into a reality.”