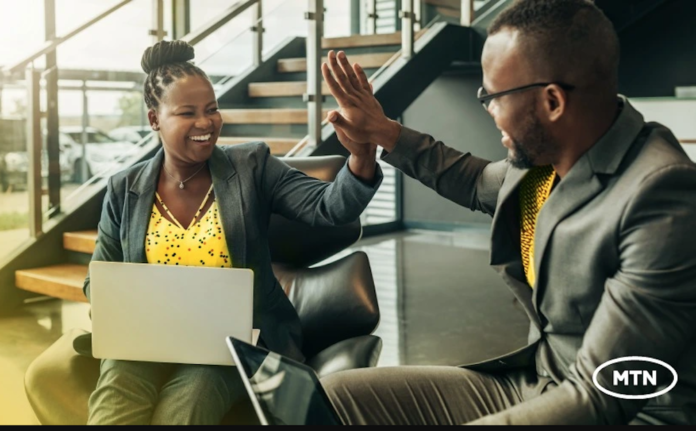 Could get even better once Covid constraint is lifted

Pan African mobile operator MTN Group has reported a 37% growth in data revenue in the quarter ending on March 31. Fintech revenue was up by 21.2% too, but the overall average was dragged down to 15% growth by voice revenue, which increased by just 2.6%. MTN Group now has 274 million customers in 19 markets and it has delivered a solid first quarter performance, said Group President and CEO Ralph Mupita in South African daily IOL.

Double-digit service revenue growth and expanded earnings margins are a good enough endorsement of the company’s execution of its Ambition 2025 strategy, said Mpita. Earnings before interest, taxes, depreciation and amortization (Ebitda) were up 21.1%, following an improvement in its margin from 44.2% to 46.4%. Group service revenue exceeded expectations for the medium-term targets and grew by 15.9%.

Many of the group’s markets are still navigating Covid-19, said Mupita. Consumer spending on mobiles will be affected by rising inflation and interest rates as food and energy prices vary. National prosperity in each region is affected by currency weakness against the US dollar, a variable that is out of the control of the telcos. By the same token, supply chains experienced disruptions, and to mitigate the risks of network rollout, capital expenditure was accelerated in the quarter by each different country’s local operator.

“This environment has contributed to a notable shift in customer spending patterns and greater competition for share of the consumer’s wallet,” said Mupita. MTN Nigeria had an outstanding quarter in an economy that is growing faster than most in   Africa. The regional telco’s service revenue was up by 22%, with a rising Ebitda margin – from 53.1 to 54.6%. Subscriber numbers swelled 3.2% to 276.2 million, partly as a consequence of new SIM registration regulations in Nigeria. This meant it added 1.7 million subscribers in the quarter, after adding 1 million in the fourth quarter of 2021.

Active data subscribers increased by 13.1% to 125.6m. Active Mobile Money (MoMo) customers increased 25.9% to 58.7m and the value of the average MoMo transaction was up by 12.6%, with the total reaching $59.9 billion. In Ghana the fintech business saw new commission-earning rules implemented in the third quarter of 2021, which impacted transaction value. Adjusting for this, the transaction value grew by 34% in constant currency terms. The number of active merchants accepting MoMo payments increased by 46.8% year-on-year to 765, 211 and the total value of MoMo merchant payments rose by 125.2 % year on year to $4.3bn.

The deleveraging of the balance sheet was progressing well. Strong liquidity was maintained with headroom of R53.2bn ($3.27bn) in cash, and R32.6bn ($2 billion) in committed undrawn facilities, as of March 31. MTN SA recorded a “healthy” 4.6% increase in service revenue line with the group’s medium-term guidance. “This performance shows the resilience of the business, against the backdrop of a challenging macroeconomic environment, with a rapidly rising unemployment rate, and increased pressure on consumer disposable income,” said Mupita.