MWC 2013: Small cells – is the industry trying to run before it can walk? 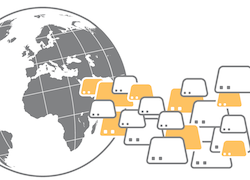 “The small cell industry is at a defining moment. Over 98 percent of operators think small cells are essential to their future and femtocells alone outnumber macrocells globally and are expected to constitute over 85 percent of all base stations by 2017,” said Gordon Mansfield, Chairman of the Small Cell Forum in a statement.

But there remain concerns among the operator community about the technology.

When Mobile Europe spoke to Thierry Bonhomme, Senior EVP of Orange Labs, Networks and Carriers, he said small cell deployment was not at the top of his priority list.

“We deployed some small cell solutions but this remains small compared to the investment in the traditional cellular network,” he said.

“The specific challenges of small cells relate to getting an operational solution: having procedures, tools and technologies to ensure efficient traffic location and backhauling.”

The problem with backhaul

Daryl Schoolar, principal analyst for Wireless Infrastructure at Ovum agrees that backhaul is a concern.

“We’re getting there as vendors are showing smaller form factors,” he told Mobile Europe.

“Small cells really need to have integrated backhaul, but right now it appears that most of what is available requires a second backhaul box. This means more gear hanging from lamp posts and longer install times.”

“A key need that has to be addressed is backhaul connectivity,” he said. “The wireless solutions are maturing but may not quite be there just yet in terms of size, cost and reliability.”

According to Rupert Baines, Marketing Chair of the Small Cell Forum, backhaul is “an unavoidable problem” that operators need to get on with but one that isn’t impossible to overcome.

“There’s no cookie-cutter way but you can plan for it,” he told Mobile Europe. “There are enough backhaul solutions – there is a solution for all the base stations you want to deploy. It’s the same problem that we have with metro WiFi, but you don’t see people saying it’s an impediment.”

“The ‘problem’ in the small cell area right now is that the focus in the media and sometimes among our vendors is on ‘4G small cell/femto solutions’ rather than on 3G solutions,” he said.

“4G capacity is not an issue right now and therefore the need for small cells/femto for 4G is not an urgent issue. On 3G however there are too few options on the market to create efficient solutions.”

Responded Baines: “There’s a lot of noise about the new 4G small cells, rather than the 3G small cells which were announced two to three years ago. But [3G small cells] do exist and they are the products shipping today. Lots of operators and networks are building them out and achieving very good results.”

He added: “There are very few vendors who don’t have 3G public access products – Huawei, Cisco, Public Wireless and many other vendors were all demonstrating very good quality 3G small cell at MWC 2013 that are being deployed by operators now.”

It’s all about the multi-mode, baby

“The attraction is that if you can do it all in one box, then it becomes much easier to deploy and manage; your capex is much more efficient and your opex is significantly reduced,” Baines added.

In an attempt to address these issues, the Forum has published an “all you need to know” release programme designed to help operators on small cell deployment.

However, Mansfield clearly has eyes on a bigger prize: “How do we help the next 150, more conservative, operators of all sizes from across the globe roll out small cells of all types?” he said. “Our new Release programme is expressly designed to overcome this challenge.”

It must be hoped that the industry is not running before it can walk.