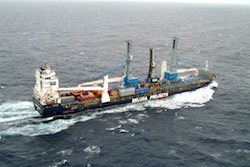 Technology to protect busy shipping lanes from GPS interference and jamming has been deployed across Dover and the east coast of the UK.

The General Lighthouse Authorities (GLAs) of the UK and Ireland said seven reference stations are now in operation that are able to provide additional position, navigation and timing (PNT) information to ships fitted with eLoran signal receivers in the event of a GPS outage.

eLoran is based on long-wave radio signals and can provide navigation information for ships in busy trading channels, as well as vital timing data required to maintain the operation of phone networks, power grids and the internet.

The technology is independent of GPS and, unlike satellite-based technology, is not prone to interference by weather or illegal data jammers. eLoran signals are “one million times” more powerful than GPS and are able to penetrate buildings and underground and underwater locations.

Dr Geoff Darch, principal consultant at international design, engineering and projects management consultancy at Atkins, commented: “Global navigation satellite systems, like GPS and Galileo, provide vital positioning and timing information to help the operation and management of infrastructure across a range of sectors.

“These systems are very effective for this purpose but are susceptible to interference including by space weather. eLoran is a great example of a technology that could provide an important back-up satellite navigation systems should these become endangered or degraded.”

The UK is the first country in the world to deploy the technology for both passenger and cargo shipping companies, the GLAs said, with additional reference stations having been built in the Thames, Humber, Middlesbrough, Firth of Forth and Aberdeen.

It is one of the busiest shipping regions in the world, with 200,000 vessels expected to cross the Channel each year by 2020. Ships making the journey transport 95 percent of the UK’s trade.

South Korea is said to be interested in forming an eLoran alliance with the UK after it became the victim of a 16-day GPS jamming attack, allegedly carried out by North Korea, in 2012.